I had a milestone birthday last week and I’m trying not to feel downright old.  The problem is, I am downright old. I was lunching with a friend to celebrate this occasion and we were both commenting that the bar on our concept of “old” kept sliding forward as we approached the ages we formerly thought of as ancient.

I can’t help but notice that a lot of people in the obits are younger than me. And worse, I actually know, er, knew some of them. I even wrote one of those obits.

Olof and I are five months apart in age, so for five months a year, I get to be a trophy wife.  When we have milestone birthdays, we tend to celebrate them together on Olof’s July birthday with barbecues and outdoor festivities.  Otherwise, my birthday would hardly be recognized at all.

That’s because anyone with a December birthday will tell you, it’s a total rip-off.  Babies just shouldn’t be allowed to be born between November 30 and January 1. Family and friends are already swamped during December so a birthday that month is just another obligation, and the weather is usually too sucky no matter where you live to do some nice al fresco event. And need I mention that there is a special place in hell for the people who give you what they call a “combined birthday and Christmas gift.”

We aren’t fooled.  And just so you know, we keep track.  When your May birthday rolls around, we’re so tempted to give you a combined Christmas and birthday gift.  I’ve never actually done it but the fantasy is delicious.

As it turns out, by the time my actual birthday rolled around last week, I’d already had two birthday cakes with my name (along with Olof’s) on them from celebrations last July. But I still insisted on getting my own cake with just my name for my birthday last week. (I bought it myself.)

Milestone birthdays are often marked by rites of passage.  At 21 you can finally drink without a one of those two-left-eared fake IDs. At 30, you have to rethink all that stuff about never trusting someone over 30. At 40, it’s time for a serious mid-life crisis.

On your 50th birthday, you open your mailbox to find an AARP card and an appointment for a screening colonoscopy.  Congratulations! You’re old! And you may have cancer of the pooper!

As my 60th birthday approached, both sons wanted to know what I might like.  Seizing the opportunity, I said that what would make me happiest would be if they would each write a short letter relating three happy memories they had of me.  I hated to beg, but I wasn’t getting any younger.  Rory, predictably, quickly negotiated down to one.  For his part, Henry replied, “Can’t I just buy you something?”

On your 65th birthday – as soon as that Medicare card is laminated and tucked into your wallet -  the dementia anxiety attacks – and jokes – begin. We laugh, of course, to hide the fact that we’re completely terrified. Watching the 11 o’clock news about the elderly person who has wandered off from his facility truly puts fear in your heart. You can’t help but super-impose your face on the screen. And you just know your hair would look like hell.

It didn’t help that soon after my 65th birthday, my older son, the perpetual prankster Rory, saw an ad on TV for a placement service for the severely memory-impaired. Several days later, a very sympathetic woman called and asked for my husband Olof, and when told he was at work, was dismayed to learn that I had been left unattended. She seemed to have a great deal of information about me and when I adamantly insisted “I do not need institutional care!” soothed, “You seem to be having one of your good days, dear.”

As part of our joint 70th birthday festivities, I put together a 400-slide show of Olof and me to show during a celebratory dinner with the kids. Afterwards, there were wonderful toasts made - Henry gave a four-hanky tribute to both of us.  I gave a toast to Olof, commenting on how different this evening would have been had Olof not come into our lives.  Both kids simultaneously chimed, "200 fewer slides?"

The kids, of course, accuse both of us of spending too much time doing what they call “rehearsing for death.” But Olof is the first man in his family to ever live to 65 (brutal familial cancer gene, fortunately diagnosed in time for him to be treated) while my mother died at 54 and my grandmother at 48. Actuarial tables? Bwahahahaha. It’s hard not to feel like we’re on borrowed time. Every birthday, we do our little happy dance around the table singing “Woo-hoo! Against all odds! We’re still here!” We honestly can’t believe we are still here.

We just really wish the cremation people would stop sending us mail. 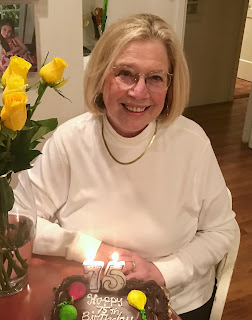