It becomes harder and harder to find really special gifts for Olof at Christmas, especially when he has everything he wants, buys it himself if he doesn’t, and we’re always trying to downsize.  But in 2018, I hit the jackpot: a slide rule.

Let me be clear that there aren’t that many people left who even know what a slide rule is, much less covet one.  Or know how to use one.  Or wouldn’t rather just calculate on their Apple Watch 8.

Olof remembers hovering over the slide rule case in the Cal Tech bookstore orgasmically ogling the higher end models.  It was as close to sex, he recalls, as he was likely to get in that era.

In Olof’s and my youth (see “Mesolithic era”) there were, astonishingly, no handheld electronic calculators.  The really geeky guys (they were always guys) had slide rules which are mechanical analog computers, a phrase that I’m sure helps you as little as it did me.  (By “computers”, we mean a device that helps you make computations rather than something you plug into a power circuit.)  Sliding the little bar thingey (not its technical name) back and forth, you could do multiplication and division and also functions such as exponents, roots, logarithms, and trigonometry if you knew or cared what those were.  Olof informs me it was accurate to three places.

Now, one would think that there would be a ton of cheap slide rules available out there for the mathematically sentimental, until you then realize that those two terms are mutually exclusive.  What was astonishing as I began my search was that searching “slide rule” on Amazon usually just got you pictures of slide rules on coffee mugs, T-shirts, and even wall paper.

Suffice to say, the better source was eBay, and not surprisingly, every option was labeled “pre-owned.”  If you own stock in a company that claims to make new slide rules, you should sell.   A technologically-savvy neighbor helped me weed through the choices and ultimately found one that, while pre-owned, appeared to be new.  The seller apologetically noted that the case was engraved in gold with the name “William G. Vande Logt” presumably making it less valuable (unless your name was William G. Vande Logt).

I was sold the second I saw it.  A slide rule with a back story! Does life get better than that?

When it came, the leather case and carry strap (if you wanted to wear it on your belt to look super-geeky), were still in its original box. The documentation underneath it was literally crumbling and didn’t appear to have ever been removed.

William Vande Logt appeared to have been underwhelmed with this gift.

I immediately Googled his obligingly-unusual name and found the obituary notice of his death on May 10, 2012 at the age of 81.  He had been employed for 50 years in the Chicago area, was an avid golfer, had no children, was pre-deceased by his wife, beloved by nieces and nephews, and greatly mourned by his dog Breezy.

But apparently not a slide rule guy.

So, I’m thinking a slide rule like this was likely given as a high school graduation present, which in Mr. Vande Logt’s case would have been 1949.  But who gave it to him? And was there a message there?  A father who dreamed of his son going into some prestigious engineering career?  Was this a sore subject?

One thing for sure:  this slide rule had never been slid.

It took a certain amount of brute force to move the middle bar which Olof notes will require an overdue application of lube, or at least some occasional use.

I’m imagining Bill Van de Logt eagerly opening what he thinks is going to be whatever the hot new gadget was in 1949 and finding…a slide rule.  I can see the long face even now.  But why didn’t it end up in the nearest Salvation Army bin? OK, maybe because it had his name on it.

So, what has this slide rule been up to since it was presented to Mr. Vande Logt?  Well, besides nothing for at least 63 years until his passing in 2012.  Mr. Vande Logt had no children to whom he could inflict this long-ago excoriated gift.  And what about the next six years after that until it was apologetically (given the personalization on the case) put on the eBay auction block?

Inquiring minds would love to know.

Our grandkids were quickly bored with Olof’s Christmas morning gift since it didn’t actually do anything.  We explained to them that a slide rule was not the same as an abacus (one of them had heard of this) which pre-dated us by at least a decade. Our then-four-year-old grandson asked if we could put it down and help him sync his new remote-controlled tank to his iPad.

Well, Bill, your slide rule has waited a long time for the loving home it has always deserved.  And if that’s not a warm fuzzy spirit-of-Christmas story, I don’t know what is. 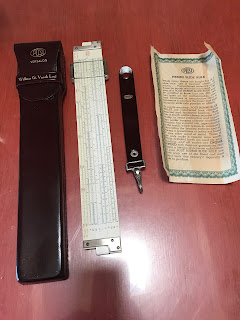 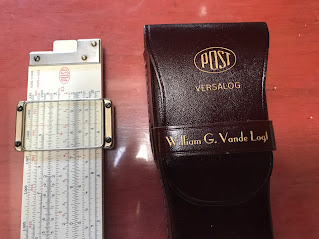