Recently my husband Olof went on an 18-day Trains, Planes, and Automobiles trip combining all the travel he had cancelled during the pandemic.  I stayed Home Alone.

Well, not totally alone.  I had our faithful bichon-poodle watch/attack dog, Lily.  She takes the job seriously.  Try to break into our house and she will sink her three remaining teeth into you.

Of course, you could offer her a bit of raw hamburger, and she will happily let you take whatever you want. The offer of a tummy rub would work as well.

Still, the illusion of protection, even if only an illusion, is nice in this era of increasingly-brazen burglaries.  I think all of us who installed exterior cameras thought we were adding a layer of security.  As it turns out, we just get to watch our stuff being stolen in real time.  Some of the boldest of the bike thieves have probably starred in more videos than the Kardashians.

I confess that at first I felt a little creeped out by being alone.  Olof, however, feels compelled to point out that his presence is the merest illusion of safety and did I really think he could defend me against a knife-wielding intruder?  But upon seeing the look on my face, he hastily added that he would, of course, breathe his last breath trying.  (Correct answer.)

In his career, Olof often traveled on business for over a month at a time to foreign places.  We would Skype on ridiculously disparate time zones, generally requiring one or the other of us to be awake at 3 a.m.   But eighteen days was longer than we’d been separated for quite some time.

Now, I’ll confess there were some genuine upsides. Every day, I awoke and asked myself: what shall I have to eat today that will be made by someone other than me?  I never so much as turned on a stove burner.  I rekindled my love for Mexican food and a local bread bakery’s phenomenal sandwiches.  Definitely not a weight loss regime.

I also have to confess that I kind of liked having an entire king size bed to myself.  I alternated sleeping on Olof’s side, my side, and even right in the middle.  I even tried the diagonals, just because I could.

Lily, meanwhile, quickly commandeered Olof’s pillow.  I don’t think he’s getting it back.  It’s amazing how fast your dog can forget you.

My biggest fear was that my computer would develop some glitch while Olof was gone. There are infinite numbers of things that can go wrong with your computer. And Microsoft thinks of new ones every day.

But miraculously, when I turned on my machine every morning, it not only came up but I had email. I figured that everything else that happened that day was just gravy.  If you are a techno-moron and Home Alone, you have to keep your expectations low.

Still, regardless of some genuine upsides, I was very relieved when Tech Support, er, Olof pulled up to the house after his 18-day sojourn.  He had had three different extended train trips, two flights that actually left on time and didn’t lose his luggage, and assorted rental cars.  And the pièce de resistance, he didn’t get Covid.

He got to re-une with his college roommates after two pandemic cancellations, to go see our older son’s now-not-so-new home in Santa Cruz, and even commune with his sister in Eugene. The purpose of that visit was to try to get her on email which she has steadfastly resisted all these years, her preferred media being snail mail and tarot cards.   How the same parents spawned these two people remains a mystery to me.

Before he left San Diego, Olof was able to show me how to track his travels (or actually the location of his Android phone) from my iPhone.  This was truly fun, especially when he was on the train from Minneapolis to Seattle. Turns out that there is actually a Joplin, Montana in addition to a Joplin, Missouri.  Olof has now been there.

I, meanwhile, took over aviary duties, normally Olof’s domain. Every once in awhile, I’d hear a massive frantic flapping which I know from experience means either a hawk is trying to tear into the cage in hopes of an easy lunch, or there will be an earthquake in about 30 seconds. If you could just get the birds to lengthen that time to, say, two minutes, they’d be a fantastic early warning system.

In fact, for the next stronger quake, I’m going to see whether our birds beat the Shake Alert I recently installed on my phone.

Meanwhile, Lily and the now-returned Olof continue to battle out who owns his pillow. In her view, it was abandoned property, and Olof is the one who should be sleeping at the foot of the bed.  Bets being taken. 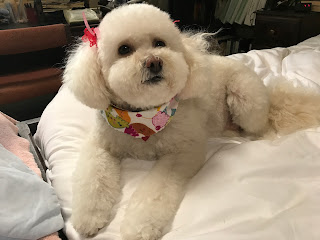 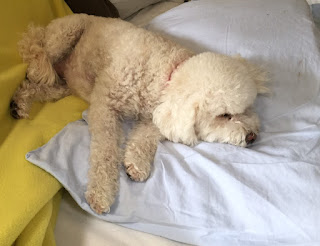 Lily took over Olof's pillow in his absence and is refusing to give it back.