Even Polio Had Anti-Vaxxers

I was more than a little dismayed to read recently that the polio virus has been detected in New York City waste water since May. The United States had been polio-free since 1979.  Not anymore.

This is a topic close to my heart as my siblings and I all contracted polio in August, 1955, four months after Jonas Salk's triumphant announcement of a successful vaccine.  I have repercussions of polio to this day.

Not surprisingly, I can’t even be civil to anti-vaxxers. Not even minimally polite. I think they are ignorant idiots.

Poliomyelitis, a warm weather virus especially targeting children, was the second greatest fear in post-WWII America after nuclear war. In the 1952 outbreak, 57,628 cases were reported, 3,145 died, and 21,269 experienced paralysis.

The vast majority of Americans couldn’t line up fast enough to get the vaccine for their kids in the mid-1950’s. But even then, the vaccine had a vocal opponent in the form of a cosmetics magnate, Duon H. Miller, who made his fortune on a first-ever cream shampoo called Vita-fluff. Mr. Miller was convinced the vaccine was dangerous, and more to the point, that polio could be prevented by avoiding soft drink consumption.  He wasn’t too keen on bleached flour either.

As far as Duon H. Miller was concerned, polio was not an infectious disease (it’s a highly contagious virus) but a state of malnutrition.  Ironically, he wasn’t totally wrong about the perils of a high sugar, refined food diet. It just wasn’t applicable to polio.

There was no internet then so he was forced to use the U.S. Postal Service to get the word out, ultimately getting shut down by the federal government.  But he still railed against sugar, “processed bread”, and even pasteurized milk for years to come.

While polio particularly targeted children, adults could contract the virus as well.  When teens and young adults remained woefully under-vaccinated, Elvis Presley agreed to be vaccinated on the Ed Sullivan show in 1956 after which vaccination rates in those age groups sky rocketed. Never underestimate a celebrity endorsement.

In truly unlucky timing, given that a vaccine to prevent polio was likely going to be available within months in our small New York state town, my siblings and I contracted polio during a trip to rural Ohio to see my dying grandfather. Most likely cause: we kids spending the week cooling off behind the house in a contaminated creek with a polio outbreak upstream.  Sewage in that era fed into the creek and polio (unknown at the time) is caused by fecal contamination.

When we returned from that trip, all three of us became seriously ill, the dread polio diagnosis clinched by a painful spinal tap.  There had been no cases of polio in our area, and wishing to keep it that way, the local Board of Health quickly quarantined us.  Let me say, it’s no fun being a pariah.

For a long time afterwards, none of the neighbors wanted their kids to play at our house. It wasn’t clear at that time how polio was transmitted (even bananas and mosquitos were suspect), and no one was taking any chances.

When you’re quarantined in a small town, you end eating lot of canned food.  Even if there had been Instacart, they wouldn’t have delivered to us.  I remember literally gagging on Chun King canned chow mein and chop suey, determined I’d never ever eat that cuisine again. When a meal is so awful that you remember it for the rest of your life, you know it was pretty terrible.

Years later, when I was dating my first husband in New York City, it took him a full year to convince me to go to China Town and try non-canned Chinese food, which I instantly loved.

In those hot humid August days in 1955, I remember being as sick as I’ve ever been.  Probably we kids recovered better than our poor terrified parents. The little boy in the polio ward bed next to my sister’s was suddenly, the next day, in an iron lung, a behemoth ventilator of the era used when polio has caused respiratory paralysis.

I wish every parent who doesn’t vaccinate their child could time travel back to the 1950s to see how children suffered from now-preventable diseases. I don’t remember mumps, measles, and rubella being any picnic either.

The fact that the polio virus is detectable in NYC waste water is a clear indication that polio is circulating in the city. The New York Times has reported that a Rockland County, NY, man has recently been diagnosed with polio and left paralyzed.  Unlike Covid, polio is totally preventable with vaccination

I recently read an interview of a woman who said that in lieu of vaccinations, she was feeding her children a totally organic regimen so their immune systems would be able to resist infection. Sounds an awful lot like shampoo guy Duon H. Miller.

Sorry, lady.  A healthy diet and wishful thinking just aren’t going to do it. 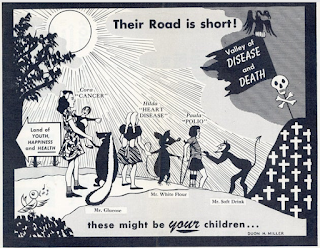 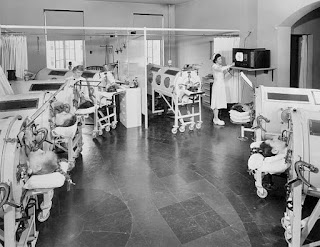 Iron lung for patients who suffered respiratory failure from polio
Posted by Inga at 2:01 PM