It's For The Birds

Over the four decades I’ve lived in my house, we’ve noticed sudden influxes and exoduses of bird populations. One was even human-induced. For Henry’s fourth birthday, I hid five pounds of peanuts in the shell (that’s a lot of peanuts) around our front yard as one of the game activities. Whoever found the most got a prize.

But it turns out that blue jays love peanuts in the shell.  So for at least the next decade we probably had the most flourishing blue jay colony in North America. They’d even come up to Olof on our patio table in the morning as he was reading the paper and eat cracker bits out of his hand.

And then one season they just disappeared.  I tried “reseeding” the yard with more peanuts but just got rats, who, it turns out, like peanuts too. Actually, we’ve discovered that rats like pretty much everything.

But as the blue jays disappeared, they seemed to be replaced by crows.  (I’m guessing there is a correlation.)  Given that we have plenty of crows, I decided to learn a little about them, hoping to find some redeeming habits other than their using our brick walkways and the roofs of our cars - and even our heads - as target practice.

The first question anyone asks about crows is whether they’re actually ravens which have more cachet.  This is, after all, La Jolla. The Jewel is not a town that has crows and rats. We prefer to think of ourselves as a community with ravens and…no rats.  Sorry on both counts.

For inquiring minds, here’s how you tell a raven from a crow:  A crow’s tail is shaped like a fan while the raven’s tail is wedge-shaped, not that I’ve ever been able to get any of them to slow down long enough to tell.  The big giveaways are that the crows travel in groups (as opposed to the ravens in pairs) and are far louder. Far, far louder. At 5 a.m., I’m tempted to stick my head out the back door and yell, “Geesh, you guys!  Do you have any idea what time it is?”

Crows are reported to eat over 1,000 food items including “carrion, fried chicken, hamburgers, Chinese food, French fries and human vomit.”  I confess I was intrigued by the order on this list. Intentional?  In a study by someone who clearly has too much time (or money) on their hands, crows were found to prefer French fries in a McDonald’s bag over those in a brown paper bag.

Crows mate for life but males will cheat.  (Is this sounding familiar?)  It’s actually pretty amazing considering that male crows have no penis. The male crow’s sperm is transferred from their cloaca (a cavity at the end of the digestive tract) to the female's cloaca in an act that takes all of 15 seconds. Definitely short on the foreplay.

Once crows have mated, they no longer demonstrate courtship displays.  Is that sounding familiar too? What's the point of bringing her a nice piece of cow dung if she's already committed?

If the male crow is non-fatally injured, his mate won't leave him although reproduction apparently drops waaaay down. I'm thinking it would be hard to notice the difference if all you ever got was 15 seconds to begin with.  Female crows seem to have very low expectations.

Moving right along, the expression “eat crow” – i.e., having to admit to a humiliating mistake – suggests that crows themselves are not good eats. Others say they taste like chicken.  (Joke.) Regardless, given that they are scavengers, there is an inherent aversion to essentially eating what the crows themselves have eaten.  One website noted that one crow "will feed two people who don't know what they're eating or 12 people who do."

The two mallard ducks, Quick and Quack, who show up every year to poop in our pool, don't seem to be intimidated by the crows. Nor do the wild parrots who like to mooch a free lunch off our songbird feeders.

Seagulls, of course, have been perennials but this year we noticed a different and potentially disturbing behavior.  Usually they stick to the coast but this year, we’ve seen groups of five or six of them circling various neighbor’s houses in frenzied squawking for more than an hour. Sometimes even after dark. What is attracting them to leave all those tourist-generated pepperoni pizza crusts that are usually the mainstay of their existence?

I texted my next-door neighbor the next morning.  Did they by any chance leave a barracuda on their back patio?  Maybe a pizza? A body?  (If you live next door to me, you get these kinds of emails.) The gulls were obviously very fixated on something.  Thus far it remains a mystery, which, since I have no life, I intend to solve.

Now, if only the crows and sea gulls would eat rats… 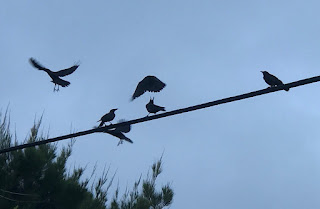 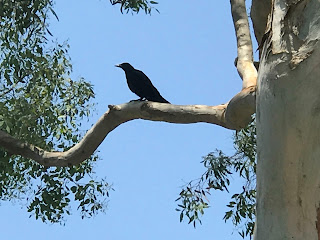