It Was A Very Covid Christmas

Was this the Christmas that just wasn’t meant to be?

Like so many people, Olof and I were reflecting at Thanksgiving on how much less chaotic this Christmas was going to be than last year. In 2020, our hotel in L.A. precipitously cancelled the reservations of all guests who weren’t essential workers, and we were scrambling for the PCR tests that one of the relatives in our family group of 20+ was demanding of everyone.

But now, as Christmas 2021 approached, all five grandchildren were back in on-site learning, much to their mothers’ relief (and sanity). All were now vaccinated, even the seven-year-old, and all adults boostered as well.

Christmas at our younger son Henry’s house in L.A. is always everyone’s favorite two-plus days of the year.  Both our family and our daughter-in-law’s family get along well. (As her mother likes to say, “no one is crying in the kitchen”).  My daughter-in-law is a fabulous cook and baker, and decorates their home like a Norman Rockwell painting. Her parents, from the East Coast, always overnight out three different kinds of smoked salmon along with some amazing caviar and other fishy delicacies including herring for Olof and me from the best deli in New York to serve for Christmas morning brunch. (Both families being multi-ethnic has its definite advantages.) The five grandkids are all the perfect ages for Christmas.

So what could go wrong?

Well, pretty much everything.

It was December 21 when the first text came from Henry. His fully-vaccinated seven-year-old had a low-grade fever and malaise, and so, in an abundance of caution since the in-laws were arriving from the East Coast the next day, they had him tested. To their surprise, it was positive.

The L.A. grandkids’ private school not only has a rabidly-strict mask policy, but erected temporary classrooms to reduce classroom size to ten, and seem to have cornered the world market on individual plexiglass bubbles.  They also test all the kids once a week.

How does such a kid get Covid?

Alas, Christmas had be to be summarily cancelled.  The in-laws were fortunately able to divert to Northern California to spend Christmas with their son and family (who had been due to come to L.A. as well.)  But everyone, collectively, was heartbroken.

Personally, I was willing to risk Covid for the smoked salmon for 20 that had already been delivered to my son’s house in L.A.  (My daughter-in-law’s mother wryly observed, “I hope they don’t lose their sense of taste and smell.”) Maybe they could leave a selection in a cooler on the front porch for us to pick up? Worth the three-hour drive to L.A. in the rain.

Meanwhile, the poor seven-year-old was isolated in his room, no contact with sibs, with Masked Mom bringing sustenance several times per day. I FaceTimed him daily. He was bored beyond belief, but was being allotted pretty much unlimited screen time which he concluded might be worth Covid.

But then my daughter-in-law tested positive herself.

Meanwhile, two family members who had taken advantage of cheap fares to Europe were due to be arriving back on Christmas Eve, planning, as always, to join us.  But when the wife did her pre-flight Covid test it came back positive, quarantining them in a Vienna hotel room for at least 10 days.  It wasn’t long before her husband tested positive as well, re-starting the clock.

Tearfully, I cancelled all our plans: the hotel, the dog sitter, aviary tender, unpacked all the stuff I had already packed. It was going to be a very sad Christmas.

By pure serendipity, while I was picking up a prescription at CVS on the 23rd, a shipment of much-coveted Covid home test kits arrived. Word spread like toilet paper deliveries, er, wildfire. They sold out in less than an hour.  I bought two, just in case.

Some friends heard our plans had been cancelled and graciously invited us to join them and their children and grandchildren for Christmas Eve dinner.  We gratefully accepted.

It was delightful.  As sad as we were about missing our own traditional celebration, it was fun being in a family celebration with others.

Three days later, however, our friends called and said that the younger of their two adult sons, with whom we had spent a cozy evening and sat at the same table, had just tested positive for Covid.  Within days, the son’s wife and his children were now Covid positive as well. (Hmmm. Maybe we could have just gone to L.A.? Eaten the salmon?)

Two hours later, another friend texted me that all fifteen people at their own Christmas Eve dinner, all of whom had had at least one vaccine dose, had now tested positive for Covid.

As of this writing, Olof and I (vaccinated and boostered) have tested negative.  But I don’t even want to say that out loud.  It is never good to tempt the fates. There are still a whole lot of letters left in the Greek alphabet. 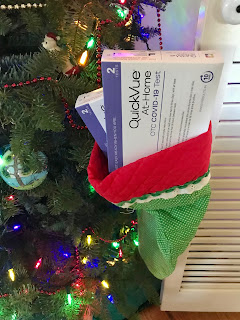 Nothing says Christmas like a Covid Home Test Kit