With Christmas trees, if it’s not one thing, it’s another. As I’ve gotten older, tree issues have been a process of constant adaptation. This year is no exception.

I’ve written previously about my perpetually-problematic efforts to set up a Christmas tree in my early years post-divorce. Single with two little kids, I went for the six-foot douglas fir simply because they were the cheapest. That first Christmas, I was on my stomach (something I’m trying to even imagine at my current age) attempting to screw the trunk into the stand while six-year-old Rory was holding up the tree. Three-year-old Henry was supposed to tell me when it was straight.  I crawled out from under the tree to discover that it was listing 45 degrees. Irrefutably demonstrating the principle of gravitational vector forces, it promptly fell over.

It was several more years until we had a Christmas tree that wasn’t leaning precariously. In a brilliant Single Mom Home Repair School solution, I tied a cord around the top of the trunk and tethered the other end to a ceiling plant hook.  Miraculously (since I guarantee that butterfly bolts are not rated for Christmas tree stabilization), it stayed vertical.

Another year, 11-year-old Henry and I, outside in the dark, amazingly managed not to sever any digits using a flimsy hacksaw leftover from the Pinewood Derby to saw the bottom branches off a bargain supermarket tree so we could get it in the stand.

The best solution came, of course, when I married Olof after 12 years of penurious single parenthood and could finally have the noble fir of my dreams delivered.  Olof even did the lights, which were always the bane of my holiday existence.

In recent years, as Olof and I have gotten older, the biggest issue has been crawling down on the floor to put water in the stand. The statins that Olof has to take since his heart attack several years ago have made him incredibly stiff such that crawling around on the ground is hard for him.  So the job has generally fallen to me.

I do a home yoga program every day on the carpet in my bedroom, constantly reminding myself of the sage advice of my former senior yoga teacher that the most important exercise we were doing was getting off the floor.

But in June of this year, I started having problems with my left shoulder, which was finally diagnosed via MRI in November as a torn rotator cuff.  Nope, I didn’t fall or actually do anything to it.  Spontaneous decrepitude has to be the most annoying part of getting older.

I’m making progress after a cortisone shot to my shoulder and dedicated physical therapy but there was no way I was going to be able to put water in the tree stand.  Even if I balanced on my good arm, I can’t lift the other one more than 30 degrees, never mind hold a water pitcher with it.  And getting up off the ground one-armed?  Forget it.

So this year we needed to go for Plan B if we were to have a live tree.

By the way, more and more friends have gone for artificial trees, some that even come with the lights already on them. The mere thought of such a wonderful invention brings tears to my eyes. Unfortunately, we have no place to store one in our garage-less cottage.

Now, you’d think that with the number of baby boomers in this country and the fact that we can put the Rover on Mars that all manner of solutions would be available.  But not all that many. If you go on Amazon, however, you will find a limited selection of tree watering options.

No surprise, I went for the lowest tech solution, a Christmas-tree-green funnel with a 40-inch tube attached that could nestle nicely among the tree branches and be anchored in the tree stand.

Now, as you might immediately imagine, the problem with pouring a lot of water into this funnel from a comfy standing position is that you are in danger of overflowing the tree stand onto your nice hardwood floors, even though you have sagely covered them with multiple layers of plastic.

So, when the nice tree delivery guy came, I had him cut off additional branches from the bottom so that, in an uber-low-tech team effort, either Olof or I could be pouring water into the funnel, and the other could be sitting on the ottoman with the flashlight beamed into the tree stand ready to say “When!”

Prior to decorating the tree, I texted a photo of our new funnel gadget to my older son with the caption, “Elderly persons’ tree watering innovation!” The irrepressible Rory texted back: “A Christmas urinal!  Great idea!”

Hopefully, next year I’ll be able to crawl around on the floor again.  But if this works, I’m saving my floor time for yoga. 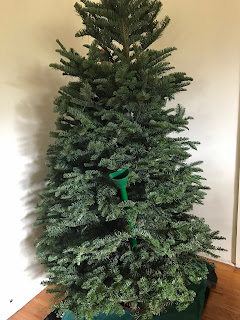 OK, so next year maybe put it on the back of the tree 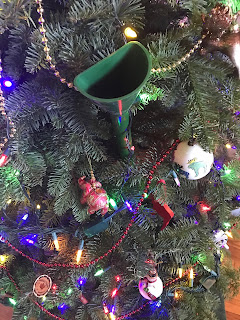