Why Burglars Ignore Our House?

During my 12 years of single parenthood, I often reflected that if I wasn’t murdered on any given night, it was only because nobody felt like it.  Last week, I wrote about the police department’s then-recommendation that I keep a can of spray starch by my bed to protect myself from intruders. It didn’t inspire confidence.

Part of the reason I felt so vulnerable was that in my first year post-divorce, the kids and I were victims of two major crimes (well, three if you count the orthodontist).  The house was robbed while I was at work and every piece of jewelry I owned was taken.  Five months later, my purse was stolen and the perps attempted to access both my home and my bank accounts.  Neither the kids nor I felt safe anymore.

Of course, the feminist in me rebelled against such an attitude of fear.  I did all the standard things: a Neighborhood Watch Program, good locks, a self-defense course for women, and even an answering machine message purportedly recorded by our Rottweiler.

My younger son’s allergies to animal dander precluded an actual dog.  The kids lobbied for a 9 mm Glock but I was terrified they’d blow my head off by mistake, or that in our current nervous state, we’d panic and waste the mailman.

Ultimately, I settled on the Single Woman Home Alarm System which consisted of leaving the house ablaze with lights hoping it would look like there were at least forty people in residence.   Probably for what my electric bill was over those twelve years, I might have been able to put an alarm system in.

But really, we couldn’t have afforded one.  Not the cost of the alarm system itself, which would have been a bargain compared to all those $100 fines from the San Diego gendarmes for responding to false alarms.  In fact, I think my older son, Rory, in retaliation for being a latch key kid, would have regularly set it off just for the entertainment value.  As my second husband, Olof, always said, “Rory looks for excitement.  And finds it.”  I knew exactly how this script would go:  Rory sets off the alarm and when the alarm company calls, Rory tells them he is being held captive by masked intruders.   The thrill of all those sirens!  The SWAT team!  Officers with guns drawn!  The Channel 39 news cam!  And best part of all: Social Services visiting Mom!

Rory and an alarm system were an incompatible combination.  But for the record, the Bomb Squad incident really wasn’t his fault.

I never did find a solution that made me feel very secure but I did ultimately remarry.  Olof feels compelled to point out that his presence is the merest illusion of safety and did I really think he could defend me against a knife-wielding intruder?  But upon seeing the look on my face, he hastily added that he would, of course, breathe his last breath trying.  (Correct answer.)

Alas, even the benefits of security cameras and a second husband hasn’t left me feeling much safer than I did then.  That’s because there seems to be a lot of really brazen crime in my neighborhood lately.

Thus far, our home has been untouched. So we’ve obviously been cased – and rejected.  (A teeny part of me feels offended.)  Sounds like they know I have a 2016 computer and iPhone that is six versions out of date.  They’ve obviously determined that the pickings are better elsewhere.  Is this, in fact, the key to burglar-proofing your house: ancient electronics?  $40 in loose cash?  Jewelry that was already pre-stolen?

But the creepy part is:  how do they know?

A close friend says that the answer is that our house just doesn’t look like there’s anything of real value inside.  “What are they going to take?” she says.  “Your VCR?”  (Do not make fun of the VCR!)

Neighbors have become extra vigilant in letting each other know when they’re out of town, as evidenced by this recent missive from the neighbor across the street: “So if a moving van pulls up to the house, if they start with the garage, don't call the police until they've finished in there.”  There’s nothing like a little crime humor to take the edge off communal anxiety.

Still, the kinds of crimes that have been occurring here really scare the daylights out of me and have brought all the security issues back, even though the now-adult kids complain the place is locked up tighter than Fort Knox.  All of a sudden, I find myself leaving all the lights on again when we go out which annoys Olof beyond belief.  He just doesn’t understand the Single Woman Alarm System mentality at all.

As we returned from a recent evening out and pulled up to the house, Olof suddenly exclaimed, “Oh my god!”

“Someone left one of the lights off!” 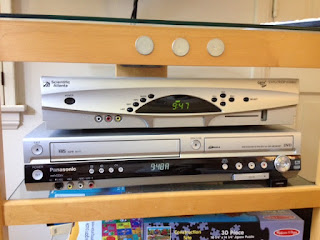 For the record, our VCR also has a DVD