If it’s fall in La Jolla, there are spider webs everywhere.  They seem to be especially fond of my house.

I’m not particular bug-phobic.  But I’ve never managed to make friends with spiders.

However, my husband, Mr. Spider, is probably their biggest fan.  The other night he went to take the garbage outside to the black bin but was back again still carrying it.  “There was a huge spider web right next to it,” he explained reverently.  “I didn’t want to disturb it.”

I keep several old brooms around the outside of the house for the specific purpose of disturbing spider webs.  The alternative is that I don’t see them, especially at night, and walk right into them.  Not only is the feeling of being engulfed in web one of my least favorite feelings in the world, but you have to wonder:  Where’s the spider?

If it had been me bringing out the trash, I would have said, "Sorry, cowboy, dinner's over.  This is a loading zone."

My husband considers spiders to be fellow engineers and has only the utmost respect – almost a  veneration -  of their talent.  There is nothing he enjoys more on a fall evening than sitting outside at dusk watching the spiders go to work.  Me, I’m always rooting for the flies.

In the decades I’ve been in my house, I know where spiders’ favorite places are:  Across our wrought iron gate to the pool area. Across the walkway to our back gate. Between our cars in the driveway.  Across the steps of our front porch. Silhouetted in the trees.  Under the house. Especially under the house.

At various times in my 12 years of chronically-broke single momdom, I was forced to crawl under the house – a heavily-populated arthropodal Xanadu (never mind my personal vision of Hell) - to pour muriatic acid into the cleanout pipe. My list of lifetime goals includes never doing it again.

Interestingly, spiders seem to be able to learn. If I forget to turn off our fountain before it gets dark and have to go outside to get to the switch, I wave my arms in front of me so I won’t get a spider web in my face. I notice that the next night, they build their web higher up.  (Thank you.)

I realize that arachnids are just trying to make a living like everyone else.  I remember first being informed of this at a workshop at Esalen Institute at Big Sur years ago when I breathlessly reported that our room had black widow spiders. The front desk counter-culture kid replied with barely disguised ennui that the spiders had just as much right to life as I did.  (I chose to squash them.)

I’ve spotted both black widows and brown recluses on my property at times.  Fortunately not often.  The preponderance of our fall spider population are (alleged) non-biters.

It goes without saying that any spider that has the nerve to actually enter my home is considered to have a death wish which I am happy to accommodate.

My arachnophiliac husband points out that spiders are good for the environment, eating disease-carrying and crop-destroying insects, among others.  I have pointed out to him that our little chunk of La Jolla heaven is minimally agricultural-intensive, although if spiders were willing to consume whatever pest chomps on my basil plants, my opinion of them could change considerably.

Olof, meanwhile, loves to wax awestruck about spiders. Who, he marvels, programmed the brains of these amazing creatures with such sophistication as to be able to create such complicated webs night after night?  How could anyone not be impressed, nay, dazzled?

Every web begins with a single thread, he explains, which are a silk produced from the spinneret glands located in the spider's stomach. The spider climbs to a suitable starting point (my porch light, for example, which has the added benefit of enticing light-attracted insects) and released a length of thread into the wind. With any luck, the free end of the thread will catch on to something else, like my hanging vinca basket. And then he's off and running. Or, in this case, spinning.

If there were a product called Arachnid Death, I wouldn't mind spraying it around outside the house when my husband wasn't looking.  but Olof would be bereft.  Olof is aware that this time of year, I'm offing spiders pretty regularly. It's one of those marital "don't ask, don't tell" things.

He, however, would never slay a fellow engineer.

After all these years of his influence, I'm surprised to admit that I am actually developing empathy for spiders.  Well, to a point. Just before I whacked a web across my front porch, I said to the spider: "See that tan house across the street with the gray Suburu in the driveway?  I think they're friendlier."  It was the best I could do. 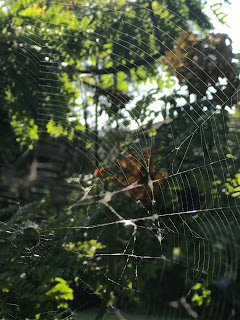