It’s been my observation over 11 years and nearly 400 columns that I always get the most response when I write about dogs or my husband, Olof. Olof is trying not take this personally.

The dog sagas have spanned our gradual acquisition of our granddog, Winston, who came to stay with us for longer and longer times until he never went back home again. We were utterly bereft (and still are) when he died suddenly of a heart attack in our living room at age eight but not before we had invested some $10,000 in his well-chronicled multitude of medical maladies.

Such was our heartbreak about Winston that we vowed to never have another dog.  Then a cunning rescue agency, recognizing mushballs when they saw them, persuaded us to take a “one-week” emergency foster, Lily, our dog today. She’s a 19-pound bichon-poodle mix, a breed Olof always disparagingly referred to as a “foo-foo dog,”

“I would never be seen in public with one of those dogs,” he once scoffed, in Winston days.

That 6’3” former Air Force pilot that you see around town with the little white fluffy dog?  That’s Olof.  It took Lily all of three days to worm her way into Olof’s anti-foo-foo heart. He is besotted over this animal.

When Olof and I adopted Lily, it was clear she was going to need extensive dental work. She had actually been relinquished to the County shelter for this reason.  The County’s medical in-take report was all of four words: “Nice dog. Terrible teeth.”

But by this time, after Winston, we already had come to grips with being a canine social service agency. So we alerted our vet that she could go ahead and put a down payment on that new Mercedes as we were adopting another dog.

Now you’d think that anybody who has spent this much money on canine medical care would have pet insurance. In fact, we originally did for Winston.  I don’t know if it was just a terrible company but they never paid for anything, insisting that the insurance didn’t cover issues that were endemic to the breed.  With English bulldogs, everything is endemic to the breed.  They are the unhealthiest dogs on the planet. In fact, our vet said that in veterinary school they used to have a bumper sticker that read, “Buy a bulldog.  Support a vet.”

But maybe we should have revisited the possibility of pet insurance for Lily.  Hindsight is 20-20.  So is stupidity.  Other than allergies and bad teeth, Lily, now 11, has been a pretty healthy dog.  That was until she was running around our front yard in early May chasing an imaginary squirrel and ruptured her cruciate ligament.  She basically blew out her knee.

Given all the restrictions of Covid at the time, orthopedic vets were only taking emergency cases. The earliest surgery date we could get for her was weeks away, on June 1, and we were lucky to get it. But her emergency after-hours vet visit, a new knee, x-rays, medications, reactions to the medication, and follow-up care ran to $5,000.

We were told that once you rupture one knee, there is a 60% chance you will rupture the other.  So maybe time to revisit pet insurance.

There are cautionary tales out there.  We have friends whose dog has now had THREE of these ACL (anterior cruciate ligament) surgeries. First the dog blew out the left rear knee, then six months later the right one.  Just as the dog was almost recovered from the second surgery, she decided to jump up on a bed, fell off, and had to have the surgery all over again followed by in-home canine physical therapy. The poor animal had by this time become addicted to pain killers requiring the equivalent of Doggie Betty Ford as well.

We have been very clear that we did not want this scenario for Lily. Our vet said not to let her reinjure herself. But try reasoning with a dog.

Alas, all my calls to pet insurance companies yielded a version of "Do we look like we were born yesterday?"  ACL problems are considered bilateral and it is not a secret to pet insurers that if you do this once, you can easily do it again - in fact, will likely do it again - on the other leg. And this time, they said, you want us to pay? Dream on, sister!

So future ACL surgeries are permanently excluded from coverage for her.

Ditto her allergy treatments (her immunotherapy shots and Apoquel) which were variously excluded as "pre-existing conditions" or "incurable."  They only cover curable conditions. Well, that are not knees.

And alas, none of the pet insurance companies pay for psychotherapy for the owners after the dog needs ACL surgery. For that alone, I'd sign up. It was really stressful. For maybe time to start a health savings account for the dog. 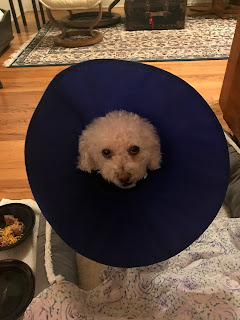