The Little Ficus That Could - And Did

Over the nearly 12 years I’ve been writing “Let Inga Tell You,” the many trees on my property have been an ongoing topic. It is well known to readers that I have a tendency to anthropomorphize trees so having to dispense with one, even a 40-foot kaffir plum that is so dead it is imminently about to crash through my roof in a strong wind killing all within, causes me acute pain.  In my defense, that kaffir plum had lovingly supported innumerable tree forts and rope bridges over the years and was probably the back drop for every family picture ever taken.  So saying goodbye to it was heartbreaking.

There was, however, the time I came home from work to find that a new friend of my then-13-year-old son Rory had managed to fall out of that tree and break his leg.  The friend – first time ever at our house – had similar instructions from his teacher-mother that Rory had from me: you don’t call Mom at work unless someone has lost a pint of blood or is not breathing. Those instructions had to be modified afterwards to include compound fractures and severe pain when I learned that the boys had splinted the kid’s leg with his skateboard and carefully counted down the 62 minutes until school was out. #lawsuitwaitingtohappen

Olof (my second husband) and I decided after the kaffir plum’s sad demise that our front yard really needed a new tree in that spot, and replaced it with a 15-foot Chinese Elm, fondly named Alma (meaning “soul”).  We won’t live to see the tree be 40 feet like its predecessor but it’s not for my lack of verbally encouraging her, er, it.

My on-going efforts to keep the local rat population from turning my orange tree into a citrus Shangri-La are familiar to many readers.

That same orange tree, however, was used as a clothes line substitute on which I hung rosaries in hopes of ensuring good weather for Rory’s wedding in 2001. A co-worker who grew up in Michigan swore that hanging a rosary on a clothesline before nuptials ensured sunny skies. Since the weather forecast for the day was dismal and the wedding was outside, I was desperate.  My collection of rosaries from my semi-Catholic childhood (one set of grandparents were Catholic) included ones dedicated to various saints but since I wasn’t sure who had the best connections, I hung them all.  The gardening guys who were just arriving looked at me a little nervously.  But they did adhere to my admonitions to PLEASE watch the leaf blowers! And by the way, the weather was gorgeous.

My sons at the ages of 8 and 10 had their first entrepreneurial experience wholesaling the organic lemons from our then-prolific lemon tree to a local health food store. They learned quality control and invoicing, supply and demand, and also that people will cheat little kids. Ultimately, the lemon tree died (the victim of a new irrigation system) and the health food store (deservedly) went under.  Which is when they learned another valuable concept of fledgling businesses:  don’t quit the day job.

As I’ve covered before, my first husband always liked to get a small live $10 tree for Christmas then plant it after Christmas  in our front yard.  By the time we divorced ten years later, our yard looked like a Christmas tree farm. The house now felt like a cave, and the constant plumbing bills for tree root problems cost a fortune, but nothing close to the nearly $4,000 it ran me to have all those $10 trees – one of them 30 feet high - removed.  Revenge against your ex-wife comes in all forms.

I’ve written several times about my often-exasperating efforts to set up a Christmas tree in my first years post-divorce. Single with two little kids, I went for the six-foot Douglas fir simply because they were the cheapest. I’d be on my stomach trying to screw the trunk into the stand while six-year-old Rory was holding up the tree. Three-year-old Henry was supposed to tell me when it was straight.  I crawled out from under the tree to discover that it was listing 45 degrees. Irrefutably demonstrating the principle of gravitational vector forces, it promptly fell over.

And now for my latest tree saga, the Ficus.  For years it was a struggling house plant trying to hold on to its two leaves. Finally realizing that it just wasn’t going to make it, and hating to just throw it in the trash (I can anthropomorphize house plants too),  I took it outside and planted it in my back yard, wishing it luck.  It is now 25 feet tall and uprooting my back gate and destroying my irrigation system.  This $5 Ficus will probably put me back $2,000 in fence and sprinkler repairs.  And this is one, alas, where the rosaries aren’t going to fix it. (But if anyone knows who the patron saint of tree roots is…) 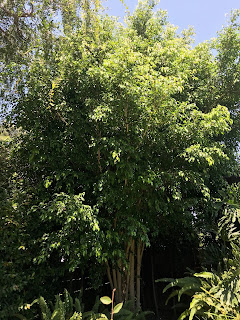 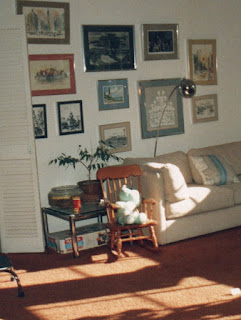 The Ficus never flourished in my living room and when it was down to 2 leaves it was planted in the back yard to live out what I thought were it's last days in nature
Posted by Inga at 10:08 AM