Never Taking Anything For Granted Again

It’s commonly known that we often don’t appreciate what we have until we don’t have it.  By the time the pandemic crisis is over, we’ll all have a list a mile long.  I, for example, would never have believed that the highlight of my week would be access to a shampoo bowl at a hair salon.  For the first time in months, I didn’t have to show up with pre-washed hair and sit in a deck chair in a parking spot breathing car fumes just to have my hair cut.

I confess I’m puzzled as to why hair salons weren’t allowed to have, say, one customer inside at a time just to get their hair washed. The lack of shampooing capability precluded every kind of color or chemical services for months. By the time you got home to wash out chemicals yourself your hair would have either turned orange or fallen out. Probably both.

One aspect of covid control I will appreciate not having to do anymore are constant temperature checks, a good idea that often fails in the execution. Four different times I’ve been told “75 – you’re good!”

“Um,” I’ve replied, not sure I really want to feed the lions but feeling morally obligated to speak up, “I think the batteries in that thing may be dead.”

They look at their unit with puzzlement. “Hmm.  I have had a lot of people with temperatures of 75 this week.”

“Not to put too fine a point on it,” I feel compelled to add, “but if your temperature is actually 75, you’d have a lot worse problems than Covid-19.”

Then, of course, there’s the public library, a beloved institution that I will never take for granted again.  I always have my reserve queue maxed out so when they closed down on March 16, it was like a Luddite Fall of Saigon as we non-e-readers stormed the local branches to stock up for what we naively thought was two weeks.  Now, of course, some of the local branch libraries have opened up with a system that has set library science back 200 years.

You still can’t go inside, but if a book on your reserve list becomes available – rather of a miracle since it’s been only recently that you could actually return any of the 40 allowed tomes from March 15 that had been joy riding around in your trunk for four months – you need to call the library from your car, read them your FOURTEEN DIGIT library card number, tell them the books you’re picking up, and then wait for someone to bring them outside and put them on a table on the patio in front of the library which your masked self then collects.  It often takes a week for the books you return (through a book drop) to go through quarantine and be available again.

The irony of all this is that the previous system to check out books was virtually touchless.  You put your books in a single pile on the scanner and waved your library card in front of it. The only time you ever touched the machine was to tap the screen with your pinkie if you wanted a receipt.

Meanwhile, I thought that The Current Thinking was that covid doesn’t really hang out much on surfaces.  Even more exciting than communing with a shampoo bowl will be the thrill of actually browsing library books inside again.

While I have yet to succumb to being an e-reader, I have been forced, against my will, to up my techno skills.  If you want to eat at most local restaurants, the menu is only accessible via a 3-D barcode taped to the table.  I had my third restaurant lunch in six months recently and was hoping to look at the menu while waiting for my friend.

“We made it really easy,” said the nice server who seated me. “Anybody can do it.”

He had to come back five times.

“Yes, I see you have your phone on but it has to be on camera mode.”

“Um, you need to actually point the phone at the bar code.”

“You have to tap that bar at the top of the screen.”

But when my friend showed up for lunch, however, I forgot all my problems listening to her saga of sorting out her son’s schedule at his private school. The kids are sorted into the Red Team and the Gold Team as to which days they go to school and for which hours, which has also messed royally with the school’s bus schedule. Meanwhile the parents are all on the Psychosis Team along with the Start Drinking at 3 p.m. Team.

So I guess I should just be grateful that I don’t have kids at home, I can at least get some access to my library books again, and my temperature isn’t really 75. 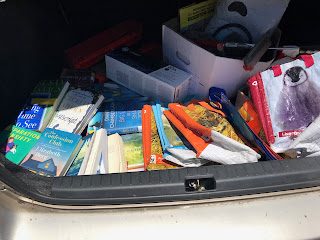 My car trunk, June, 2020:  Library books I can't return, printer cartridges I can't recycle, and shopping bags I can't use