My last two columns have been about the early days of my relationship with my first husband, Fred.  We divorced in 1983, and now that he is ailing (not covid-19), we have found ourselves reconnecting on a more positive plane and reviewing our marriage with a different eye. I’m actually glad to have the opportunity.

Marriage, I learned long ago, gives you not so much a helpmate as a scapegoat. I actually got my first exposure to this concept before I even married Fred but I was too enamored of his handsome body, quick mind, and potential earning power to pay attention.

During our engagement Fred was living in a medical school dormitory on a sub-subsistence budget and one of the ways he economized was to do all of his laundry – darks, whites, and in-betweens – in one load.  Part of the problem was that even standing on the machine lid, it’s tough to get an entire months’ laundry in one small machine. I lived in my own college dorm some 60 miles away.

“Fred,” I used to say at the time, “there is no room in there for the water.  And the stuff that is sticking out of the top if not going to get clean.”

‘Nonsense,” said Fred, the perennial optimist.  “As soon as the lower stuff gets wet, it’ll sink down, and with a little brute force…” He’d then unhook a dispenser of that nasty green liquid hand soap that was hanging on the wall next to the sink and pour it in.

Every month, Fred’s wardrobe descended into deeper shades of gray until he heard about an inexpensive laundry nearby where a little old man would run the clothes through the machine for you and even fold them up afterward.  (Fred was never much on folding.)  He decided to try it.

When the little old man dumped out Fred’s clothes on the counter, his face registered disbelief.  “Who does your laundry?”  he asked finally.

Fred didn’t bat an eyelash.  “She does,” he said, pointing to me.

The next day when we went back to pick it up, the little old man shook his head at Fred.  “If you haven’t married this girl yet, I wouldn’t,” he said.  “It took me three washes to get it clean and in the process, all the staples fell out.  Did you know that’s how she mends your clothes?”

“Staples?” I said in disbelief.

“Fortunately, she has a nice personality,” said Fred.

If there is one universal truth about brides-to-be, it is their ability to ignore all warning signs about a future spouse.  The laundry saga should have been a hint. Ultimately Fred moved from his dorm with a roommate to a tiny apartment that I don’t think was ever cleaned once.

The night before Fred had to be out of that apartment the May that he graduated from medical school, I stopped by and noticed that he hadn’t even started to pack, never mind that there were piles of dirty dishes and pots in the sink –two weeks’ worth at least.  And I said, “Fred, how are you going to be out of here by tomorrow?”  And he told me not to worry.

And sure enough, the next morning, he showed up at my parent’s home in New Jersey with a carload of boxes to store in our very damp airless basement for the summer until our marriage in the fall. The whole summer, every time my father went down to the basement he said, “What’s that funny smell?” And when we get married in September and loaded all his boxes in the station wagon, the terrible odor followed us for three hundred miles up the New York Thruway.

When we got to our newlywed apartment near the hospital where Fred was doing his internship, I started unpacking the boxes. Inside were all the dirty dishes and pots and pans, still unwashed!  The mold was so thick I was at first unable to even identify the contents, such was the growth of fungi on three-month-old tomato sauce.  I confronted Fred with the evidence.

“Wow,” said Fred, “You really shouldn’t store stuff in your basement.  Way too humid down there.”

Probably we married each other for all the wrong reasons.  At the time, I was attracted to Fred for his cool composure under pressure and his assertiveness, not to mention a myriad of other qualities.  He said he was initially attracted to me for my warmth and vulnerability.  Describing those same characteristics when we separated, I called Fred “cold and controlling” and he called me a “neurotic psycho.”  I’ve also heard it said that if people stay married, it is for different reasons than they originally married one another for.  At the time of our divorce, Fred and I agreed that he’d had enough of my vulnerability and I’d had enough of his assertiveness to last a lifetime.

I can't say I didn't have plenty of warning.  The photos below were taken for the 1981 TV show "Hour Magazine" hosted by Gary Collins for a segment called "How to live with a slob." 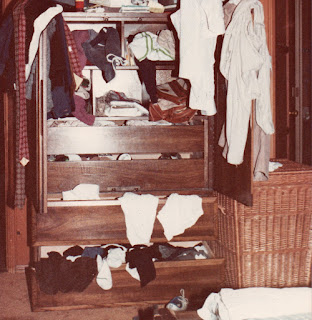 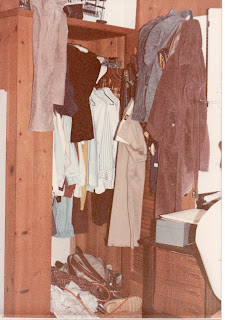 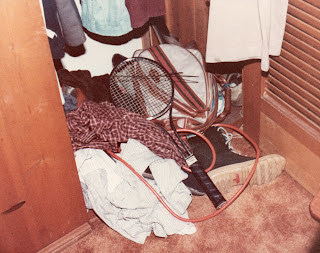