Last week I wrote about meeting my first husband, Fred, when I was in college and he was a student at Albert Einstein Medical School in the Bronx.  After six months or so, he decided to risk introducing me to his parents even though they would be disappointed that I wasn’t the nice Jewish girl of their dreams.

“Disappointed” may be a little bit of an understatement.  The gist of that meeting, as I recall, was “Are you trying to kill your mother????”

Even after it was clear that I was there to stay, Fred’s mother only ever referred to me in the third person and without conjunctions, as in:  “Ask the shiksa she wants dessert.”  These in-laws escaped from Russia in the dead of night with the clothes on their backs, enduring incredible hardships in their new land all so that their son the doctor, their phoenix rising out of immigrant ashes, could marry…me?    SO not part of the plan.

Ironically, with the passage of time (and the raising of two sons), I have tremendous empathy for her position.  Now that I have adult sons, I know I would be devastated if either of them married someone I truly thought was wrong for him, regardless of the reason.  I wish she were alive today so I could tell her. (She’d still probably tell me to drop dead, but I’d feel better saying it.)

When Fred and I divorced after 14 years of marriage, people would tell me that inter-religious marriages don’t work.  I couldn’t disagree more. I absolutely loved learning about Judaism, and Jewish traditions.  I made a Seder (Passover) dinner for 20 every year, learned all the holiday blessings in Hebrew (after our divorce I wrote them out phonetically for Fred), and gave programs on Passover and Hanukkah at my kids’ schools. After ordering a ham sandwich in Albert Einstein’s kosher cafeteria early on, I boned up on kosher law.

The one thing I hold against Judaism is Manischewitz, a ceremonial wine that tastes like prune juice laced with antifreeze.  Four thousand years and this is the best you can do?  I am sure that there used to be a lot better stuff out there in the (much) olden days.

I especially loved Yiddish. You don’t even have to know what it means to know you’ve been insulted. One time Fred and I went with his folks to visit Aunt Rose in the nursing home. When we walked in, the orderly said, “What does ‘schmendrick’ mean?” Our hearts sank. It’s about as complimentary as it sounds.  Maybe less. “It means she likes you,” said Fred’s mother. She could be very diplomatic to persons other than her sons’ wives.

In the years after Fred and I married, we would bring Fred’s parents out for a two week visit every year.  They were not the easiest visitors.  His father, aka Pop, would not change his watch to our time persisting on spending an entire two weeks visit maintaining an eating and sleeping schedule three hours different from ours.  No point in changing it if you’re just going to have to change it back, he maintained. This was not a hostess’ dream.

Pop naturally got up three hours earlier than the rest of the household but kindly made a large pot of coffee for everyone.  Unfortunately it was always much too weak. An easily correctable problem, however.

Inga:  Pop, I know you’re not used to our coffee maker, everyone’s is different and all, but you need to put in more coffee.  It’s a little weak.

Pop: The problem is you’re using the wrong grind.

Inga: Actually, Pop, this is the right grind for a drip coffee maker.

Pop: It’s probably this foreign coffee you’re using.  By the way, the Ipso Facto wants out.

Inga:  The dog is a Lhasa Apso, Pop, and you know it.  We like this brand and it works just fine.  You’re just not using enough of it.

Pop: So maybe it gets weaker by the time you late risers get up.

Inga: It does not get weaker and we get up at seven a.m.   You just need one more scoop of coffee.  You’ll do that?

Pop: (Glances at watch.)  Looks like it’s getting to be time for lunch.

Inga:  IT IS EIGHT-THIRTY IN THE MORNING AND IT IS NOT TIME FOR LUNCH.  Look, Pop why don’t you just change your watch to our time, get up when we get up, and I’ll make the coffee.  Will you do that?  Just say yes or no.

Pop: I think the problem is your coffee maker’s no good.

Inga: THERE IS NOTHING WRONG WITH OUR COFFEE MAKER OR OUR COFFEE. YOU JUST NEED MORE COFFEE GROUNDS.  DO YOU HEAR ME?

Fred (entering): Is there a problem here?

Pop: I was just telling Inga she’s got some problems with her coffee maker and she got hysterical.  By the way, the Ipso Facto wants in. 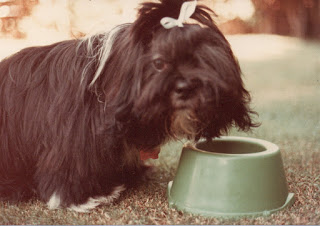