The Year Of The R-Word

Those who celebrated the Chinese New Year on January 25 know that this is the Year of the Rat.  I couldn’t help but reflect that in La Jolla, it is always the year of the rat.  The little buggers really like it here.

I would never dare mention this to the care givers who provide 24/7 care for a disabled friend of ours whom Olof and I have been helping.  We can’t even mention the “r” word over there or they completely freak out.  A year ago, during a torrential rainstorm, a hungry rodent found its way into the kitchen to take advantage of food left on the counter. Two of the care givers refused to enter the kitchen after 5 p.m. for six months.

Now let me just say that I can provide no corroborating evidence that this creature was, in fact, a rat and not, say, a field mouse. In every description of the sighting of this animal, his dimensions increased, gradually assuming the size of a small dog.

Hoping to defuse the situation and to allow us to discuss the situation without using the inflammatory “r” word, I named him Bruce.

The care giver thought that Bruce might have entered through a hole in a cabinet vent which she maintained should be immediately plugged up by someone other than her. She then thankfully ended her shift and fled the house. But her replacement was even more rodent phobic than she.  Not gonna work in a house with a rat.

Given that Bruce’s demise had to be hurried along, Olof and I came over and performed Emergency E-RAT-ication Services including peanut-butter-loaded spring traps strategically placed underneath shelves where they would be heard but not seen if they went off.  We advised the care givers that we did not provide Deceased Rodential Retrieval Services between 7 p.m. and 8 a.m.

I also acquired some sealed plastic containers that could store food items that needed to be left on the counter. I failed to mention that any self-respecting rat could chew through them if sufficiently motivated.  Sometimes illusion is as important as reality.  Getting the care givers back in the kitchen was imperative.

Days went by and no more signs of Bruce. Olof and I began to wonder if this could be a new retiree cottage industry for us. Normalcy slowly resumed.

That was until two weeks ago.  A care giver and I were standing just outside the front door chatting when a rat suddenly dropped out of the small lemon tree right next to us. The care giver immediately ran screaming down the sidewalk.

I looked at it and said, “You had to do it right then, didn’t you?”  Full-on Rodento-Phobia was back again.

I couldn’t help but notice that the rat – whom I dubbed Son of Bruce - seemed unwell. He was lying on the ground shaking. (Maybe he was terrified of us?)

I told the care giver that it appeared to me that Son of Bruce was on his way to the great garbage heap in the sky. I promised to come back and get him if he didn’t slither away into the bushes.  Frankly, I fully expected to see his furry corpse when I returned three hours later but he was gone.

I can’t help but notice, however, that it takes the care giver  a little extra time to open the door for me when I come over.  That’s because she has to remove the kitchen towels forcibly wedged under the front door. You can never be too careful, she says.

So no, I don’t mention that it’s the Year of the Rat when I go over to our disabled friend’s house. I don’t know what his care givers would do if they found out they’d been born in the year of the you-know-what. They’d probably insist on having their birth dates legally changed.

And I would never mention to them that all manner of adorable rat-themed items are on sale to commemorate the Year of the Rat, including a Rat Tarot iPhone case ($39.99), cute baby rat print for your décor ($93), a rat-shaped handbag ($498), and even a comforter ($119) with a big rat graphic and floral border on it so that when you wake up in the morning, the first thing you see is a five-foot white rodent.  (I’d love to know how this one is selling.)

But I hope the rest of you Year of the Rat folks are enjoying your zodiac birthday and being your charming, witty, intelligent selves. Just so long as you keep it to yourselves. 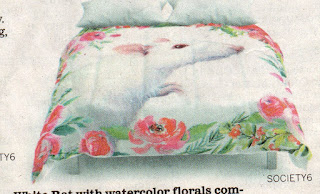