Building It And Getting Away With It

Every time I drive by 1590 Coast Walk – the ever-burgeoning behemoth at the juncture of Prospect and Torrey Pines Road – I can only conclude that La Jolla’s motto should be “Build it and you will get away with it.”

Of course, I’ve come to the same conclusion over a number of projects built in my own neighborhood.  When one former neighbor was queried by fellow neighbors about a massive spec home that looked nothing like the original plans, the neighbor shrugged. “Variances. And grandfathering.” As it turned out, variances are apparently not that easy to get, and certainly not the number that this multi-modified project would have required. And if this building conformed to FAR (floor-area rules, i.e. the ratio of a building's total floor area to the size of the piece of land upon which it is built.)  Alas, it wasn’t to be the last time I would encounter fuzzy FAR math – or fuzzy construction math in general.

A recent La Jolla Light article on 2/6/20 referenced another disputed project noting that “it never went through community review (La Jolla Development Review Committee and La Jolla Community Planning Association) because it didn’t need a Coastal Development Permit (CDP) due to what’s called ‘the 50-percent rule’ which classifies projects as remodels if 50 percent of the original walls are retained.”

I’ll admit that math is not my strongest suit but over the years I’ve lived here and witnessed countless “remodels,” it always baffles me how a single standing wall constitutes 50 percent, given that the original structure was not a lean-to.

And while I’m wondering out loud, I also keep pondering how, in this era of rights for the disabled, all these new two-story mixed-use projects are being approved with no elevators to the residential space upstairs.  The proposed project on Pearl Street (where the 76 Station was) is the latest example.  When this was queried at a meeting of a different mixed-use project, the architect maintained that only a main floor handicapped parking spot was required, no elevator.  This would assume that any handicapped person who wished to reside in that building would have to live in their car.

Now, I am aware that the people who serve on the many committees which review proposed residential and commercial properties are unpaid and work tirelessly to keep La Jolla from turning into Miami Beach. (Thank you.) But is it just my imagination that so many structures – residential and commercial – seem to end up looking a lot different than what went through – and was approved by – a local review committee?

I will concede – and anyone who has been reading my column for the last 11 years knows how much I hate to concede – that all the rules for FAR, 50% of walls for a remodel, and ADA requirements are far more complicated than the general public – that would be me – understands.  An architect friend has painstakingly attempted to explain all the arcane rules of FAR – what parts of the structure are included, what parts not.  Ditto remodel and ADA rules.  Frankly, my eyes glaze over.  So, more projects are probably compliant than I might like.

Still, like many other locals, I just feel powerless about these issues. Maybe this can be an opportunity for someone in the know to explain it to a lot of inquiring minds.

As for 1590 Coast Walk, in an article in the Light from August 9, 2018, a local architect explained the changes with this example:  “If a project was approved in the Discretionary Permit process as a cake with chocolate icing, but that very same cake then goes into final drawings and remains the same cake but now with vanilla icing, this is a change that might get frowned upon by some neighbors, but would seem to certainly fit within the parameters of the City’s Substantial Conformance guidelines.”

Frankly, to me, the 1590 Coast “cake” looks like it has evolved into a 20-foot Playdough metastasis. A letter to the Editor in the Dec. 27, 2018 issue of the Light observed, “This massive windowless blob would make the designer of a Soviet prison block blush.”

It may be unfair, but I have come over time to a fundamental belief that most developers have the souls of garden snails and speak with forked tongues.  I absolutely do not believe that the tenants of the new mixed-use project at the old 76 station are going to be non-car-owning Uber users and that those tiny furnished apartments aren’t going to be vacation rentals.  But it’s going to be built.  And we’ll all say, “How did that happen?” 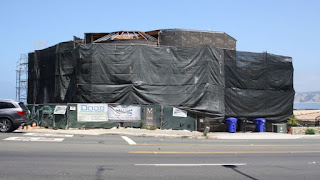