Trying My Best To Keep Up With The Grandkids

As anyone who has read my column for any length of time knows, I truly believe that technology will be the death of me.  Probably literally, when I can’t figure out how to call 911 on my cell phone as I’m having a heart attack.
But I do have to admit that my iPhone has given me ways to interact with my young grandchildren that I wouldn’t have otherwise. “Interact” may be somewhat of an exaggeration in the case of the four-year-old who has on occasion FaceTimed me eight times in a single day just so I’ll appear.  As soon as I do, he chortles and hangs up.  He just loves the power.

My 9-year-old granddaughter has a story writing app on her iPad and can send me the stories she writes with it to my iPhone.  It is a testament to my love for her and to how much I want to encourage her literary efforts that I figured out how to download the app myself to be able to read her work.  I am seriously app-aversive.  But if I hadn’t, I would have missed such precious prose as a story entitled “Avery in 25 years”:

In 25 years I hope to be taller and smarter than I am now.  I will have a family of five, 2 girls, 1 boy and lots of pets.  I will have started a chocolate business. [She is definitely my granddaughter!] I will make the sweetest sweets the world has ever seen! I will be writing books about everything from things about ants to things about people. I’m going to have a huge house with my brother. We’re going to buy my other brother a ranch because he really likes horses and we think a ranch would make him happy.

Unlike either of my sons who were never pleasure readers, this young lady has been a voracious reader from the moment she learned to read, including all the Harry Potter books.  Recently she tried to engage me in a game on my iPhone where I had to guess the title of a book based on a series of emojis.  Here’s how it went:

Avery: OK, this is a game called name that book.  You have to guess the book from the omojis [sic].

The emoji string was a fairy, three kids, a basket, a bus, a mall, and a diamond.

Me: “OMG. This is hard!  How about “fairy kids take a basket by bus to the mall to buy jewelry?”

Avery: You have to guess the TITLE.

Me: That was a title.

Avery: It’s “Harry Potter and the Sorcerers Stone.”  Try this one:

This emoji string looked like another fairy, one kid, the bus, the mall, a bunch of spider webs, 14 spider emojis, and some green creature.  A duck? A coiled up snake?  I figured it had to be another Harry Potter book so I guessed the only one I could think of (since I haven’t read any of them):

Me: How about “Harry Potter and the prisoner of Azkaban.”

Avery: Nope!  It’s “Harry Potter and the Chamber of Secrets”.

Me:  You should have asked Baba [Olof] to do this.  He’s read all the Harry Potter books three times!

She quickly concluded that I was neither well-read enough nor sufficiently emoji-capable to play this game.  And she was totally correct.

While I am extremely loathe to admit that there are any advantages to technology, another way I’ve been able communicate with the grandkids is sitting together on the sofa with their iPads (which they know how to use and I don’t). researching charitable contributions that I will donate to in their names.. While I was initially concerned that the grandkids (and their parents) would refer to me behind my back as Grammy Tax Deduction (OK, they do), I did want to encourage them to help the world be a better place.

My youngest grandson really loves "horsies" so one of his was wild mustang protection.  He’s also really into “fishies” (he has a tropical fish tank) and one of his picks ended up being vaquitas – a type of porpoise endemic to the Gulf of California.  Only 30 left on earth!  Bettas and Tetras are still in ample supply so my grandson was happy to have the vaquitas be his “fishie” pick.

Avery was big on banning puppy mills and protecting elephants. (She’s been big on elephants ever since the adoption of Shirley several years ago – my all-time most successful Christmas gift ever. Well, that and the lava lamp and weed to the other grandparents).  My other grandson went for lowland gorillas and snow leopards.

OK, I admit it. This is all made a lot easier with an iPad.  But that’s as much as I’m willing to concede. 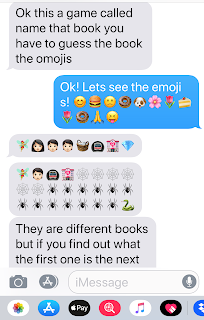