As a dog owner, it turns out there are worse things than your dog rolling in poop.  And that’s your pet contracting a truly nasty bug or eating something in your yard that she really, really shouldn’t have, and inflicting massive intestinal mayhem all over your beds, furnishings and floors for two weeks.

On the third night of this, at 3:30 a.m., I thought I heard Lily running toward the front door and in racing after her to let her out, I slipped in a slurry of fecal miasma and landed on my back. That meant that for the next week, I had to delegate all cleanup of subsequent ordurous deposits to my initially-skeptical husband. But seriously, I’d much rather clean up dog diarrhea than be in as much pain as I was in.

In a show of solidarity (we really wished her stool had had more solidarity), and to make it up to Olof,  I began setting my alarm for every hour all night, every night, so I could hobble to the front door with the dog and let her out.  When you watch your dog poop literally 15 times in five minutes, you’re not all that sure you want to let her back in.

The onset of this episode could not have been worse.  We were due in two weeks to go for Christmas to our younger son’s home in Los Angeles.  It was our older son’s turn to join us with his family plus our daughter-in-law’s extended family would be joining us from far-flung locales as well.  We bring Lily every year and she revels in all the attention.

Our wonderful vet, hoping to have Lily cured by Christmas, brought out the heavy artillery when the rice-chicken-pumpkin diet plus a week of Metronidazole failed to resolve this issue.  She added more antibiotics plus Canin Gastrointestinal kibble, Tylan antibiotic powder, and Proviable Forte digestive health supplements in both paste and sprinklable form.  The thick paste came in the form of an injection syringe the plunger of which actually requires some force to use and hence it was completely understandable how the first time it ended up in the face of the husband holding the dog rather than in the dog’s exceedingly reluctant mouth.

It goes without saying that Lily should have had the healthiest intestinal tract in America after two weeks of this regimen.  And indeed, she did finally start to get better.  But as we had no idea what caused this event, we were concerned for its sudden reoccurrence given that the house in L.A. would be populated by seven young food felons whose priors included leaving trails of food particles in their paths and feeding Lily comestibles of the non-dog-food persuasion under the table which could compromise her fragile digestive motility. Beef tenderloin and garlic mashed potatoes were probably not the foods of choice for this dog at this point. My daughter-in-law was hosting 25 people for the better part of three days, and a dog emitting hourly metabolic effluvia on her premises would cause a rift from which our relationship would never recover.

Ditto our hotel. The Kimpton Palomar in Westwood allows dogs to stay for free. More specifically, continent, non-barking dogs.  But as the days before Christmas approached, Olof and I would examine Lily’s stool and ask ourselves: could this deposit be picked up from the floor of a hotel elevator?  Or was it just a lake that would require holiday housekeeping services, a $100 tip, and a red line across our faces for future reservations?

My efforts to find someone to stay with Lily at any price for December 24 and 25 were for naught.  When our dear friend Jim heard of our dilemma, he heroically offered to help. That Jim volunteered to stay with Lily when her alimentary canal was still channeling the Colorado River rapids is an act I doubt we’ll ever be able to repay.

Meanwhile I researched doggie diapers and ordered some off Amazon.  On the same day I also ordered male incontinence supplies for the disabled friend we are helping and the Barbie stroller which my granddaughter coveted for Christmas. You can’t believe what my “Recommended Just For You” list looks like now.

It was frankly a huge relief not to have Lily with us in L.A.  We knew that if we brought her and there was a single mephitic emission at either the house or hotel, we’d have to just pack up and precipitously leave, Lily anointing Olof’s car all the way home.

Well, it’s the new year, the carpet and upholstery people have done their magic, and all the comforters have been sent for professional cleaning. (Given that this had gone on for two weeks, we considered just burning down the house.)  Now if we could just figure out what she ate because it would be totally eradicated from our property. 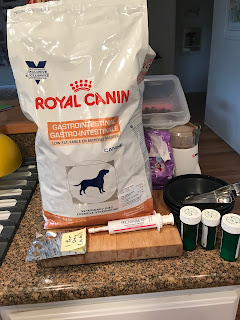 Our vet pulled out the heavy artillery to make Lily better
Posted by Inga at 10:13 AM