I can’t believe that after nine years and 300 columns I’ve never written about toilets.  Well, actually I did but it was about these new high-tech ones that have no obvious flush mechanism, like, say, a handle. In my view, they should be BANNED from guest bathrooms.

But today we’re addressing low-flow toilets, a topic near and dear to all Californians’ hearts since we have the strictest flush laws in the country.  All toilets sold in California have to meet low-flow efficiency standards requiring they use no more than 1.28 gallons per flush.

Of course, given California’s perennial drought problems, water conservation has almost become a religion.  So, well before the plumbing police officially invaded our bathrooms, people – nice people like Olof and me – converted two of their three toilets to low-flow when they remodeled those bathrooms 15 years ago.  Let me say that we have been underwhelmed with the results.  As Olof points out, toilets that have to be flushed four times to “achieve clearance” are NOT water-saving. We make sure the Ferraris of plungers are standing by in both of those bathrooms. You can get a good aerobic workout from plunging. But it isn’t our preferred exercise.

Lately, however, we have learned that there is hope.  Neighbors of ours remodeled their guest bath at around the same time we did and put in a low-flow toilet that, astonishingly, performed even less well their ours. Fortunately, that bathroom didn’t see much action in the way of overnight guests – just polite after-dinner pee-ers - until their young grandchildren, now six and eight, started coming more frequently for overnights.  The neighbors were constantly plunging the toilet.  And no, this wasn’t young kids deciding to see what would happen if they flushed toy rocket parts and stuffed animals, a phenomenon I know waaaaay too well. (A 2010 column led with the line: “My husband has always maintained that I married him for his skills with a sewer augur, but that’s only partially true.”)

But no, this was stuff that was intended to be flushed.  And these kids are tiny – 50 and 60 pounds respectively.  And picky eaters to boot.  Seriously, how much poop could they produce?

My friends were considering posting a sign over the commode along the lines of:  Please do not poop in this toilet!  But it seemed a tad inhospitable. And definitely a dilemma for overnight guests since the only other commode was in the master bedroom.

They reported that they even considered a different sign, “Flush early and flush often!”  But they really couldn’t count on compliance.  Especially from a 6-year-old who could not yet read.

They finally decided that just as there was incentive to Build a Better Mouse Trap, there must be a sufficient mass of other unhappy low-flow toilet users that someone was inspired to build a better toilet trap.  So off they went to a local plumbing fixtures emporium.

May I help you? asked the nice sales lady.

Husband:  Our toilet has been outgunned by the grandkids.

Saleslady:  I’m guessing you bought this toilet 10-15 years ago.  [They said yes.]  Well, she continues, leading the way to the sales floor, there are MUCH better options now. Far improved technology from the first ones that just used the same mechanism with less water.

She points to an American Standard toilet and says, “I sold this model to a family with three teenage water polo players whose Dad is a Navy Seal. They’re very happy with it.”

The neighbors are still trying to make the connection between water polo player kids/Seal dad and performance.  But it invokes an image of athletic persons who presumably eat a lot and therefore…. Definitely not 6-year-old picky-eater poopers. Marketing is everything.

So they bought it.  And couldn’t be happier.  One of the reasons it apparently works better is that it simply has a bigger hole for effluvia to leave the premises.  No, er, bottlenecks, so to speak.

The other improvement is that it simply has more “gusto,” as my neighbor says.  You flush that handle and it clearly means business.  Business with your business.  No “now if you’ll all please move to the sewer pipe” politeness. This one completes a flush in 1.5 seconds (scientifically timed by the husband) versus a full four seconds by the old one. Same amount of water in the tank but definitely more velocity.

They’ve nicknamed it The Terminator.  And it has improved their lives immeasurably.

We still have the original industrial-strength toilet in our master bathroom and up to now, Olof has always maintained that they will have to pry it out of his cold dead hands.  (Kind of a mixed metaphor there but you get the idea.)

I’m definitely getting the name and model number of the neighbor’s new commode to replace at least our two low-performing low-flow toilets. It would be the best Christmas present ever to retire from the plunging business. 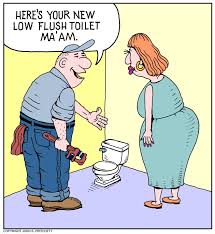 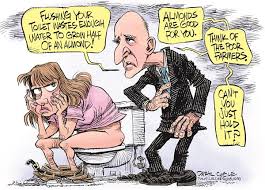