New York Times Crossword Can Really Be A Puzzle

You can always test whether someone is a serious cruciverbalist (crossword puzzle person) if they know the answer to the clue “Bambi’s aunt.”  Also if they do the puzzle in ink.

Of course there is a huge practice effect with crosswords.  I initially started doing them because they were touted to ward off brain decline.  Then I read an article in the Wall Street Journal that maintained that the only effect crosswords have on your brain is to make you better at crosswords.  I was crushed.  But by that time, also hooked.

Sudoku just makes my head hurt but there is nothing more relaxing to me than a nice hard puzzle.  (OK, chardonnay works too.  Chardonnay in combination with a puzzle is even better.)  It can’t be so hard that I can’t do it but if it’s too easy, it just annoys me.

I have to say if I had a preference, there would be a NYT puzzle version that was sports-free.  If the answer is three letters, I know it has to be Els, Orr, or Ott, but I can never remember which one is the hockey player.

I fortunately have my nuclear-physics-trained husband to help me with the physics clues, of which there are a surprising number.  He’s pretty good on those annoying Tolkien answers too  which you’d think I’d know having been subjected to all three deadly Lord of the Rings movies, but which I’ve totally suppressed.

I would also ban puzzles that have obscure foreign names as both down and across clues so you never know if you got it right.

Just like recipe ingredients in the New York Times Sunday magazine, there seem to be words in the English language that are never used except in New York Times puzzles.

Quaint, British expressions that I don’t think even the British use any more are regular answers, particularly the word “egad(s).”  The clue will be “By Jove!” or “Good gravy!” or “Heavens to Murgatroyd.” (Who the heck is Murgatroyd?)

Alleged British slang tends to creep in regularly as well, as in “rough bed” (doss), “play hob with” (do mischief to), and “simpletons” (geese).

It was early in my crossword puzzle career that I was totally stymied by the clue “Philadelphia sewer.”  Now, I read this as referring to a series of plumbing pipes under the city of Philadelphia and couldn’t get it at all, only to discover that the answer was “Ross” (as in Betsy) who sewed our first flag.

The NYT puzzle just loves those sneaky clues and I have been brought down by more than few, for example, “One whose 60-something” (Dstudent), “sticky foods” (kebabs), “iPhone8” (TUV), “Jolly ‘Roger’” (Ihearya), “snaky character” (ess), “heat shields” (badges),  “homey” (dawgs), “something the Netherlands has but Belgium does not” (capitaln), “maker of thousands of cars annually” (Otis), “very basic things” (lyes), and “took out the junk” (sailed).

OK, I admit I have a fairly concrete mind.  But sometimes I think that the NYT just makes up words. For example:  “Visibly stunned” (agasp), “really angry” (ireful), “running slowly” (seepy), “visibly embarrassed” (ablush), “mounted” (ahorse), “one who avoids being touched” (epeeist), “like paradise” (edenic),  “venomous biting” (aspish), “echo” (revoice),  “board near a gate” (enplane), “embiggen” (enlarge), “making bubbles as an ocean wave” (spumed), “treat as a saint” (enhalo), and “uhhhhh…” (erm).  Erm?

There are some clues I find ridiculously obscure and that’s when I start writing really vicious letters in my head to the NYT puzzle editor, Will Short.  For example, “peddler of religious literature” (colporteur), Korean War soldier” (ROK – Republic of Korea), “PV=k” (Boyles Law), “gladly, old style” (life, as in “he would as life eat rocks as….), “gloss” (annotate), “fancify” (doup),  “waterfall” (cataract), “enlightened sort” (arhat), “cabbage or kale” (doremi - apparently a slang and somewhat dated term for money), “Spartan serf” (helot), and “what a mobius strip lacks” (end).  Like, regular human beings would know these?

Some clues just come under the heading of just plain stupid such as “Improved place to hang a hat” (antler).

As much practice as I’ve had at the New York Times puzzle at this point, I can safely say I will never achieve the status of people who do them in ink.

And for those who were agog (frequent British clue) to know the name of Bambi’s aunt, it’s Ena. 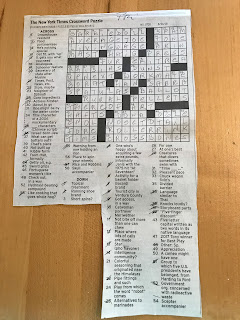