My first and second husbands probably only have two things in common: First, in perhaps ill-considered moments, they married me. Second, they both prefer to hang their clothes on a wooden clothes valet.
You might be forgiven for not having a clear vision of the item I'm talking about. If you Google "men's valet," you find an assortment of polished wood stands generally meant to hold a single suit jacket, a pair of suit pants, a shirt, and a tie. From the last quarter of the 1800s to the middle of the last century - a more formal era of men's clothing - the middle to upper class dapper dresser employed a valet to set out his clothes for the following day.

Earth to Inga husbands: It was not meant to hold 90% of your wardrobe.

My first husband's valet stand was a beautiful antique made of mahogany. At least that's how I remember it during the two brief occasions when I actually saw it which were the day we married and the day we divorced. Possibly the secret to its unblemished sheen was that it did not see daylight during the 17 years in between.

At the time, it seemed to me that my husband was engaged in some perverse sartorial challenge to see how many items of apparel he could hang on this thing before it suffered catastrophic structural failure. Alas, it never did. (Damn that mahogany!) In the years since we divorced, however, I've come  to suspect a different motive.

"Have you seen my green shirt?" first husband would inquire casually. I'd shrug in the direction of the valet, which generally resembled a headless 300-pound homeless person. "Gotta be in there somewhere."

Of course, what he was really asking was that I perform an archaeological excavation for the green shirt which I usually found embedded in an early Mesolithic layer. Then, of course, I'd be stuck hanging up - in the closet - the two months of clothes that had been on top of it and were now piled on the bed. I was such a slow learner.

I have no hesitation about saying that I was extremely glad to see the valet go when we divorced. For 12 years I got a reprieve until Olof and I married. The contents of his 2,500 square foot home in San Jose weren't going to fit into my tiny La Jolla cottage so he was very selective about what he brought down. So imagine my distress when the moving guys showed up and carted into our bedroom another wooden valet stand. I still remember the scream that rose in my throat when I saw it: NOOOOOOO!I confess I momentarily contemplated paying the movers to have it inexplicably end up under the wheels of the truck. But running over one's brand new husband's furniture didn't seem like an auspicious start to a marriage.

And thus another wooden valet stand has been in residence in our bedroom for the last 20 years looking astonishingly similar to its predecessor. However, unlike my ex whose entire wardrobe generally lived in onion-esque layers on the valet, Olof only uses his for "home" clothes - jeans, sweatpants, T-shirts, sweatshirts. But the hooks on Olof's are such that after a certain point, things just start falling off on the floor. I am forever picking them up, only to have them fall off again minutes later.

Of course, putting up with such petty annoyances in a spouse is just part of marriage. And in Olof's defense, it might be pointed out that he has a disproportionally small amount of space in our armoire which he never points out is the armoire he himself brought from San Jose. Further, the two tiny closets in our 1947 cottage are only 36 inches wide. He might also mention that there is a chair in our bedroom that is frequently draped with whatever I was wearing earlier that day.

The valet, he maintains, is his equivalent of the chair. No, I parry, I would have to be employing the seating of a small boutique movie theater to even begin to approximate the number of items on the valet.

After two decades in the company of Valet From Hell II, I confess I'm fantasizing more and more about having it suffer a tragic accident, but realize it is so well padded that should it inadvertently fall it not only wouldn't break but would probably bounce up and hit the ceiling.

But I may have a better plan. Two weeks ago I wrote about the termites that had eaten the baseboards in our bedroom. Hey, guys, have I got a treat for you! 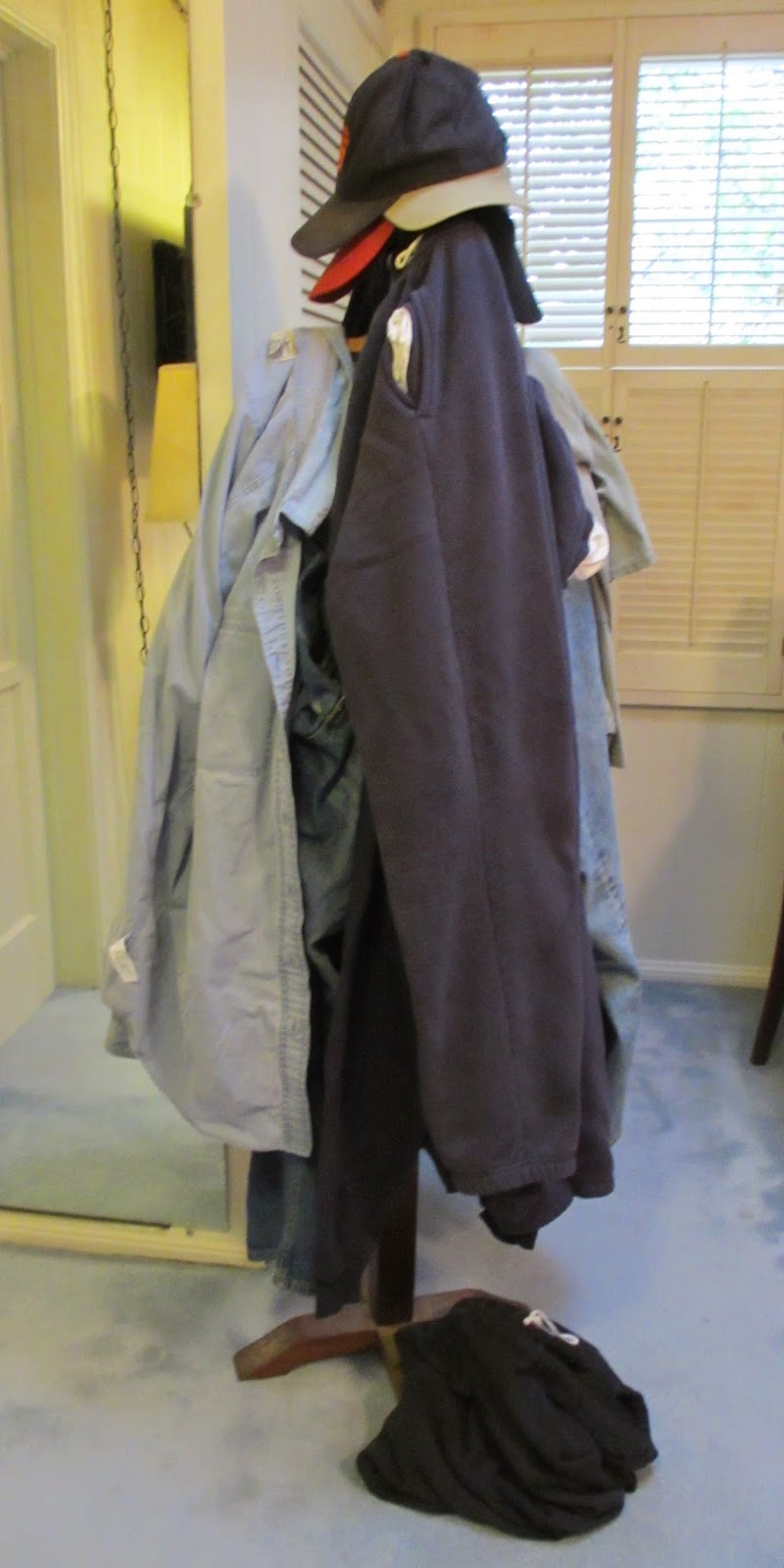 Thanks for joining my facebook community!
Posted by Inga at 9:49 AM