When The Dog Becomes A Part Time Job

It was not auspicious that 11 hours into the new year in 2022, our dog blew out her right knee.

When she blew out the left one in 2020, we were told that there was a 60% chance that it would happen with the other.  We were desperately hoping to be in the lucky 40% but that does not seem to be God’s plan for us. God’s plan for us is to be a canine social service agency.

Unfortunately, both knees (ACLs) were ruptures that could only be fixed with surgery.

I’ve written before about our beloved dog who came into our home in 2016 as a “one-week  foster.”  Utterly heartbroken, we had insisted that we would never have another dog after the sudden demise of our equally beloved English bulldog Winston, who, after generating over $10,000 in medical bills for his multitude of bulldog-related afflictions, had a heart attack in our living room.

But of course, within three days we had fallen totally in love with the foster dog, even after being warned that her rotten mouth (the reason for her relinquishment to the pound) was likely to set us back $2,000.  (It did.)  We just had “mushballs” written all over us.

The doggy orthopedist had warned us after the dog’s surgery in February that if she re-injured the knee while it was healing that we’d have to start all over – including payment – and the second repair never heals as well as the first.

We had a friend whose dog injured a healing knee after they forgot to put the gate across their stairs to the second floor.  A whole new surgery, in-home PT, and pain medicines ensued.  The dog became addicted to the pain meds and ended up doing doggie Betty Ford. We elected to have custom padded ramps built in every room of our house and even on the front steps to preclude this scenario.

But only a month or two after our dog’s plastic knee seemed to be finally healed, she suddenly stopped eating.  As I set her bowl down in the morning, she was now sniffing it and walking away.

We changed her diet and even tempted her with foods that she would normally inhale: tuna, ground beef, shredded chicken, cheddar cheese, canned post-surgical food.  Not interested.

There is no test or procedure for a human that you can’t also do for a dog.  In this case, minus any insurance. After the first ACL surgery, I looked into pet insurance.  But it excluded ACL surgeries and pretty much most of the care she ended up having this year.

Of course, there was that initial big expense for the new knee. In the quest to find out what was ailing our beloved pet, she underwent scans, every lab test known to canine, a virtual pharmacy of meds, and pricey special diets at $6 per teeny weeny can. With physical therapy and ramps, our dog-related expenses for the year came to $17,000.

Tumors, cancer, stomach blockages, metabolic disorders (like diabetes), heart issues and parasites were slowly eliminated.  The one thing that did become apparent – and we were sure this was going to cure it – was that she had a massive infection in her mouth and sinuses. But even after we were $1,600 poorer and she had eight fewer teeth, she still wasn’t eating.

Ultimately, it was concluded that as a now-13-year-old dog, she seems to have mild chronic gastritis and some chronic hepatitis (somewhat elevated liver enzymes).  But she is still uninterested in eating.

Getting food into her is literally a part time job for both Olof and me.  If you just put it out there and leave it, it will sit there forever.

The few items she will even consider eating need to be warmed to a specific temperature and hand fed to her off our fingers.

At one point the vet staff suggested a thought that had occurred even to us:  Do you think your dog is working you?  But no, a dog that rejects hamburger and tuna is a dog with issues.

My personal theory at this point, now that we’ve eliminated everything else, is that she has lost her sense of smell.  For dogs, smell is everything.  It’s how they understand their world, and certainly decide whether they want to eat something or not.

But the good news is:  she’s still with us, something we seriously doubted even three months ago.

And other than the eating issues, she’s mostly her same old self, chasing her squeaky pups and doing her Cujo act at the front gate when other dogs come by.  But it’s pretty clear to us at this point that the current feeding regimen is how it’s going to be.

As we’ve alerted friends, every visitor is required to take one stint feeding the dog.  Allow 30 minutes and bring an apron. 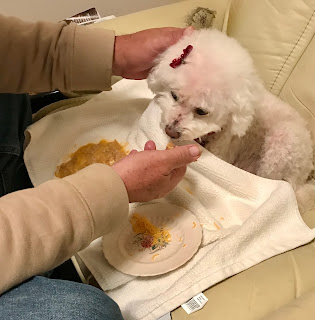 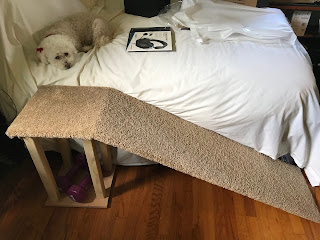 Building ramps in every room for Lily to get up and down was waay cheaper... 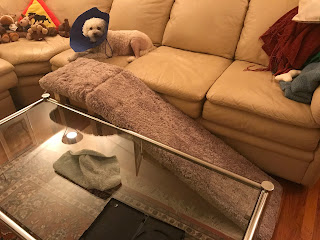 than having to repeat the surgery if she re-injured herself... 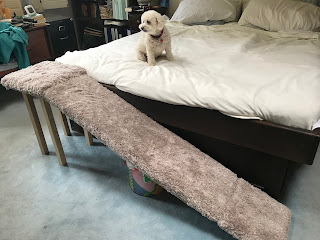 and waaaay preferable to a stint at Doggie Betty Ford (and yes, there is one)
Posted by Inga at 11:24 AM