On the “best” side, there is no better or faster way to reunite lost or found pets with their owners than these networks.  Often the owner is simultaneously posting a photo of the lost pet while someone else is posting a “found” message.  So much better than stapling photos on utility poles.

Sharing recommendations for vendors, contractors, cleaners, and repair people is another huge benefit.  So many people I’ve hired in recent years have come from these recommendations.

I personally think I live in a wonderful neighborhood. My immediately neighbors are all close friends so I tend to assume that everyone in this neighborhood is as lovely as they are.  Hence, it’s always discouraging to realize when reading our local social media posts that there are Trolls Among Us.

The crime alerts were one of the main reasons I subscribed to our area social media network but I confess that one has been a mixed bag.  Most of my neighbors have outdoor security cameras so there are regular posts of miscreants stealing bikes and power tools out of crowbarred garages, swiping the packages off front porches, vandalizing cars, and committing acts that we all hoped those security cameras would discourage. It's our own too-personal version of Crime TV.

Alerts will often go out on the network about some suspect person going door-to-door allegedly selling pest control. Like we’d fall for a dodgy pretense like that. Nosiree! Such persons are presumed to be, at the very least, a house caser (and at times have been) but equally likely an ax murderer.

Unfortunately, sometimes people actually are selling pest control.  But within minutes, their Ring-generated criminal-in-action headshot is in every in-box in the network, and probably also on the FBI’s Most Wanted List.  I have to say, I’m really not sure I’d want to sell anything door-to-door in my neighborhood. I’d be afraid someone would shoot me before I could even mention the comprehensive roach-and-rodent package.

It always seems that no matter how innocuous a post someone makes, there has to be at least one person who posts a truly toxic totally-unhelpful response.  Then everyone piles on.  It sometimes gets so incredibly ugly. When I see a post with 78 comments, I don’t read it.  It will only make me sad.

There was one a while back that started with a post about homeless people and devolved into housing issues in general, short-term rentals in particular, the general lack of police response, Governor Newsom, Governor Newsom’s mother (who produced Governor Newsom), why Republicans are bad people, why liberal Democrats are destroying democracy, climate change, the last election, and seals at the Children’s pool. I think the mayor and his mother got in there somewhere too.

Dog Poop Wars are another continuing theme on the network although this one I kind of get.  While the majority of dog owners are responsible people, there are those who seem to decide to take out their hostility on the world by letting their very, very big dog poop on the sidewalk.  Preferably right in front of one of those little signs that people stick in their flower bed saying “Please clean up after your dog.”  (Inquiring minds want to know: how do they get them to do it in that exact spot?)  Explicit photographic coprological evidence is provided.

During the pandemic, there were those who appointing themselves Chief of Covid Police, posting regular rants on neighborhood network about perceived non-compliance.

Alas, there are also those folks who think this forum is a good place to post their personal political views.  I wish the moderator of this network would tag it with a yellow warning message like “! This is a forum for lost pets and crime reports! Stop this now!” (Where is the virtual photon torpedo when you need it?)

Not long ago, someone posted video from their Ring camera of a truck hitting both their car and their neighbor’s, then taking off.  The poster was hoping someone would recognize the truck and its owner could be compelled to make restitution.  A perfect application for this app.  There was lots of sympathy, but some troll just had to post “Your fault for parking on the street. Should have parked in your driveway.”

Gah. There it was, the gratuitous snark. Too bad we can’t vote these people off the island, er, neighborhood. Or subject them to an endless loop of Bambi re-runs where Thumper says, “If you can’t say something nice, don’t say anything at all.” 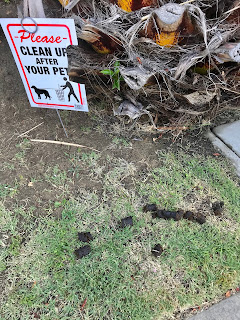