Thinking Outside The Dent

Over the years, I have found that some of my best kitchen tools would be under the heading of “off label,” i.e., not originally designed for kitchen use. Or at least their original kitchen use.

Several decades ago, in the dark days before Amazon, I found myself unhappy with the selection of wimpy meat pounders at my local kitchen store and ended up purchasing a large rubber mallet at what was then Kragen Auto Parts. I’d been inspired by seeing one in action at the service station and thought, “Yup, that’s exactly what I need.” Chicken or meat or even bags of nuts wouldn’t stand a chance against this sucker.

I still vividly remember the saga of its acquisition.

The main problem was explaining what I wanted to the Kragen guy since I didn’t look like the kind of person who pounds dents out of automobiles.

“So, what are you going to use it for again?” the nice sales guy queried, totally puzzled.

The salesman pondered this for a moment.

“You know this is an auto parts store, right?”

“It makes the chicken really flat,” I explained.  “But I think it will work equally well for schnitzel or even nut topping for streusel.”

I could sense this guy wanting to back away from me.  But shortly thereafter, he returned with a large rubber mallet.  Alas, the mallet head was black. “Is this what you want?”

“Exactly!” I said.  “But what other colors does it come in?” A black rubber mallet would look really ugly in my kitchen. Way too, well, automotive-y.

But as luck would have it, another sales person, who was likely fired within minutes of my departure, piped up, “Actually I think they come in white too.”

Amazingly enough, they were able to order me one in white. When I came to pick it up, the guy at the desk said, “The chicken lady, right?” I smiled, “You know, you guys should really be thinking outside the dent.”

Thirty-some years later, this mallet has been one of the most versatile kitchen gadgets I’ve ever owned. I was tempted to bring the Kragen guys some chicken piccata just so they could see what a phenomenal job it does. But frankly, they looked more like mac n’ cheese people.

Another great “Didn’t-come-from-Williams-Sonoma” gadget is a pair of surgical forceps, acquired from a medical supply store.  I’ve had these for at least 25 years now.  They’re perfect for sautéing really small items.  I figured that anything that could keep a firm grip on internal organs would probably be able to hang on to gnocchi.  As it turned out, these forceps also worked well for tormenting my then-15-year-old son. Kids that age don’t want to know about female anatomy unless it belongs to someone in their own demographic.  Henry watched me cooking with the forceps one evening and commented that it looked a lot like a surgical tool.  “Yes,” I replied, “the surgeon gave it to me as a souvenir after my hysterectomy.  But, don’t worry -  I ran it through the dishwasher first!  Hey, where are you going?”

OK, I admit it.  It was mean. But maybe you’ve never lived with a 15-year-old boy. Revenge is where you find it.

Moving right along, Olof decided several years back to re-create his family’s Christmas cookie recipe to send to all the family, including decorating them, his job as a child.  He even included a batch of anatomically-correct ginger people to punk his sisters.  (They were strangely unappreciative.) After trying numerous implements to decorate his cookies and gingerbread persons, he discovered that the ultimate tool was a tiny screw driver that we kept on hand for adjusting the screws on top of sprinkler heads.  It got dishwashered first, of course.

But my most recent kitchen innovation has been to use an adjustable rubber jar lid opener as a grip for a glass with ice in it.  Let me just say that it is perfect for older persons with mildly arthritic hands to keep a good grip on their gin and tonic.  There is nothing worse than sitting out on a nice early summer night with an adult beverage only to have to slide through your fingers and splash all over your orthopedic pillow. Growing older is a constant process of accommodations.   I think I should apply for a patent.

I’ve been writing this column for nearly 14 years now and I honestly can’t think why I never managed to write on this important topic. (OK, the job lid opener is a newer innovation.)

Of course, now there’s Amazon and the choices are pretty much unlimited so creativity isn’t required. Somebody somewhere is selling just what you want. But it still never hurts to think outside the gadget. 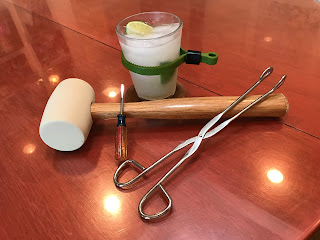 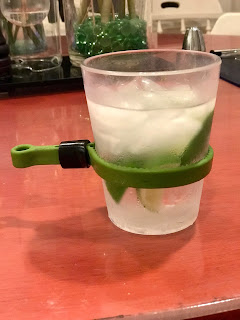 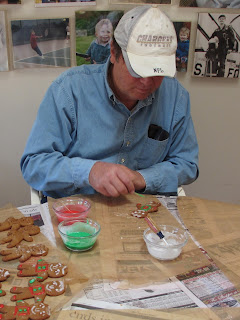 Note: Images of piccata making and hysterectomy not available