One should never tempt the fates, which is why I have no idea what possesses me to do it now. But here goes:

Somehow, both Olof and I have managed to keep from contracting Covid-19.

Of course, we were vaccinated and boostered as soon as these opportunities became available to us.  We tried not to put ourselves at unnecessary risk but I did continue, fully masked, to grocery shop and patronize my pharmacy. The latter were survival mechanisms. When you know that a trip to CVS is what’s keeping you alive, things are grim.

However, so many of our friends, equally vaccinated and boostered, did contract Covid.  Why not us?

Of course, I have my theories, some even kinda sorta backed up by science.

Our Christmas was cancelled at the eleventh hour when my youngest grandson and daughter-in-law, at whose home we were headed, both tested positive for Covid.

Fortunately, some dear friends who live walking distance from us invited us to join their Christmas celebration instead.  Shortly thereafter, five of the 12 of us who had spent four hours at the same indoor table unmasked (because we were eating) had tested positive for Covid.

As I said to my younger son later, if we had known we would be spending the evening with people who had Covid, we could have just gone to his house.

After pondering for considerable time what the difference was between those who contracted Covid and those who didn’t, there was only one conclusion.  The Covid folks weren’t drinking enough.  Or actually anything since they were driving. We who were walking home, however, made up for them.

I joked about this to people but some weeks later, I was surprised to see an on-line article from The Wine Spectator citing a health study of 500,000 UK residents which found that people who drank one or two glasses of red wine per day had a 10 to 17 percent lower risk of contracting Covid than non-drinkers.  White wine drinkers had 7 to 8 percent lower risk.

What if you drank your weekly allotment all at once? Would those little Covid buggers stand a chance?

Sadly for beer or cider drinkers, they had a 28 percent higher risk of contracting the disease.  Hard alcohol drinkers were screwed as well.

The authors of the project called for “further study.”  Yeah, I’ll bet they did. Knocking back a few more cases of Chateau Mouton Rothschild would be strictly for scientific purposes.

Meanwhile, my cousin Wally has a totally different theory. Our family had a summer home on Long Beach Island, New Jersey, where I spent my summers growing up. Between the island and the Jersey shore is Barnegat Bay which is about four feet deep except in the International Water Way.  My friends and I were able to earn easy money clamming in the bay and then selling our bounty door to door. One squished one’s bare feet around in the mud (no wussy clam booties for us!) until you felt a clam, then reached down and put it your floating basket.  My own family downed at least a dozen clams on the half shell a night.  A regular sunset ritual.

Now there are those who think that consuming raw clams might be risky, and potentially riskier yet when those clams are from the questionable waters of Barnegat Bay.  But no one ever got sick. (Believe me, you’d know.)  Cousin Wally, who was a regular visitor and clam consumer, commented recently that both of his adult children had acquired Covid but not he.  “I’m thinking,” he observed wryly in a recent email to me, “that our shared history of clams on the half shell at the Jersey shore may have something to do with our immunity.”

Well, it’s probably as good a theory as any.

I’ve also read a theory that some people have genetic immunity.

My mother was born November 1, 1918 during the week of the greatest number of deaths from the Spanish Flu pandemic (an estimated 55,000 people worldwide in one week).  Her mother had contracted the flu in the final weeks of the pregnancy and came very close to dying.  In fact, relatives had to care for my mother for the first six months of her life while my grandmother slowly regained her health in an era with far fewer (none?) pharmaceutical interventions.

OK, not the same virus.  But in some sly genetic way, did some immunity to nasty viruses manage to make its way down to me?  OK, probably makes as much sense as excessive holiday imbibing and suspect bivalves.  And as noted above, it is never a good idea to tempt the fates. Hopefully this is not being read as a cautionary tale after my Covid-related demise.

But in the meantime, I’m going to have an extra glass of chardonnay at night.  Strictly medicinal purposes. 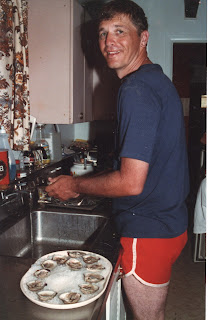 Olof shucking the nightly platter of clams on the half shell at the Jersey Shore, 1988.  Has this saved us from Covid?
Posted by Inga at 11:43 AM