Orchid Growing Tips The Internet Will Never Tell You

There are two kinds of people in the world.  Those who can cultivate orchids, and those who can’t.  I learned this indisputable fact after writing a recent column about killing what was likely my 25th orchid.

I heard from plenty of other self-professed “orchid murderers” (including the editor of this paper). So I was frankly astonished to learn that there are actually people who don’t regard an orchid as The Gift from Hell.  Their orchids actually flourish.  I was almost tempted to actually buy one just to try out all the good tips these folks shared.  Operative word here is “almost.”

Interesting, more than one person insisted the problem was that I was “trying too hard.”  Orchids, apparently, survive on benign neglect.  So all those instructions I downloaded from the internet about its precise sun placement, about misting them if the humidity level of my house wasn’t just perfect, about assessing each orchid’s personal picky water needs, about using pricey orchid fertilizer, all apparently led to my orchid’s premature death.

And that’s another thing.  Readers informed me that my orchid didn’t actually die. Well, yet.  It just lost all its blooms. It’s normal for all the blooms to fall off when they move to a new environment [my house], according to a reader.

OK, but a large flowerless stem sticking 18 inches in the air in semi-perpetuity isn’t exactly my idea of décor. I’d definitely need to pitch it before the grandkids could show up and say, “Is this supposed to be a plant?” Who needs the bad press?

So, I queried readers back, if it isn’t dead, how long until it produces more blooms?

The answers varied from: “a few weeks/months,” “could take a year,” “never” and “how long have you got?”  I need a definition of “never” so I know when I can officially give up.

Forget the orchid food.  It kills.  Your orchid will thrive, even bloom, on your neglect better than it will on attention.

It’s all about the light.  You need a window with lots of nice non-direct light. (Alas, I don’t have one. It’s my number one excuse for all those orchid deaths. My house is a cave.)

But the most unexpected advice was this:

Three ice cubes a week is the only moisture an orchid needs. If you forget, that's okay too.

Another reader swears by just one ice cube per week.  But she also talks to her plant which may make up for the other two cubes.

As previously, mentioned, there was more than one reader who agreed with me that an orchid is basically a hostile gift.

Have you ever written about gifts that require maintenance? I have a severe dislike for gifts that I have to take care of forever. An orchid is in that category, and any other plant, for that matter. Why not just give flowers that I can toss at the end of the week? Don’t give me a bag of scone mix either - now I have to bake?? To me these “gifts” are not gifts!

I guess hostile is in the eyes of the beholder although I think we’d all agree that giving the grandchildren a drum set for Christmas is indisputably in that category. I myself might be OK with the scone mix so long as I only had to add water.

I did hear one really touching orchid story that the writer has given me permission to share. When she and her husband recently moved here from Texas, they paid $200 to the movers to get their orchid to San Diego alive.

Jaded person that I am, I imagined that these movers pitched the plant in the first dumpster out of town then stopped at Vons flower section on Girard when they arrived and picked up a new one for $15.  I mean, they really do all look alike. Net gain $185 and zero hassle. Who would ever know?

Upon further query, I learned that the back story was that the orchid had been a gift to the wife after her father unexpectedly passed away from Covid last December. It obviously had special significance which had been conveyed to the movers, who had it riding on the front seat of a Penske truck and even allotted it hotel space in El Paso. My correspondent added:

I will confess that every gosh darn flower fell off of once it arrived at its new home.  I put it in a sunny window, gave each "stalk" an ice cube once a week and …it's alive again.  So, I'm thinking you simply didn't give your orchid enough time to re-acclimate to its new environment!

This has been quite an education. But even better that all the excellent tips I received, now I have a list of people to whom I can re-gift any future orchids I might receive.  That was worth the column alone. 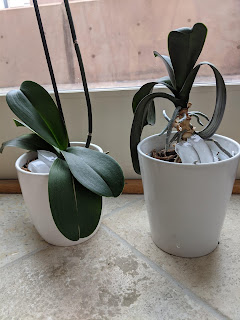 Turns out that three ice cubes a week is all it takes
(but not going to personally test it)
(Reader sent photo)
Posted by Inga at 10:35 AM