A Cure For Local Parking Problems

If the pandemic has shown us nothing else, it’s that expecting the senectitude set to navigate baffling vaccine appointment sites and to have to access menus from Rorschach ink blots taped to restaurant tables is, for many of us, a non-starter. Ditto parking into parking garages and street parking lots that require downloading an app.

Subterranean parking structures are dark, sky-challenged, and creepy, and the stalls are really tight, even for persons such as me who own a compact car. The only spots will be at the very bottom.  Level P4 will be reminiscent of descending into the Fourth Circle of Hell, an image eerily reinforced by the fact that was one is indeed circling ever downward.

They are populated with large pillars, strategically designed to be backed into. Black SUVS will be parked on either side of you in spaces marked “small cars.”  There is rarely (never?) angled parking. The dim light doesn’t help us oldies, whose depth perception isn’t what it used to be, to try to inch out of a space keeping track of both sides of the car AND that pillar behind you.  My last foray into a parking structure ended with my bumper having an encounter of the paint-removing kind.

Another major problem with parking structures is that they involve machines. If you have trouble operating your cell phone, ticket machines are likely going to present a problem for you, and not just because even to get into the lot, you have to get out of your car to get the ticket which was maliciously placed 1.5 inches from your farthest reach. (Do arms get shorter with age?)

I make every effort to shop locally as I truly want La Jolla’s long-time emporia to stay in business.  And just to be clear, I don’t expect to park out front.  I’m willing to walk five blocks. The exercise is good for me.  But if my parking place involves technology in any form, I’m not parking there. I’m ordering it from Amazon.

But alas, even the street-level paid lots are fraught with obstacles toward the techno-impaired.  It’s one thing to have to shoe-horn money into a teeny slot that corresponds with your stall number.  But those have mostly disappeared and been replaced with requirements that one text a number or download an app.  Seriously?  You lost me at “app”.  And probably at “text” too.  And now some of the lots confront you with those same nasty ink blot things that afflict restaurant tables. (My husband says they are called “3-D bar codes.”)

The clincher is that after you do all that texting and apping, they’re charging a flat fee of $10!  Hey, I just wanted to pick up some drain cleaner at Meanley’s!

All those intimidating paid lots just take so much time! And stress! And make you feel stupid! And require your bumper to be repainted!  So if you could park in a nice free angled street spot in visible daylight instead somewhere approaching Middle Earth, which would you pick?

I’m going to make a suggestion that I haven’t thus far seen, and I’m hoping the good folks on the La Jolla Traffic Board will consider it. It won’t make us oldies park in subterranean parking garages, but we might be persuaded to park in those icky app lots if we could just buy a yearly parking pass, sort of like a handicapped placard, that allowed us to park in any street-level lot. I could pop into that $10 fixed-rate lot across from Meanley’s, grab my drain cleaner, and be gone five minutes later.

To qualify for this pass, you’d have to be 65 or older, and have a signed affidavit from your kids that you are certifiably, untrainably techno-challenged despite heroic efforts on their parts over the last decade to put you on the road to modern living.

I’d buy one in a heartbeat.  So long as I could write a check to pay for it. 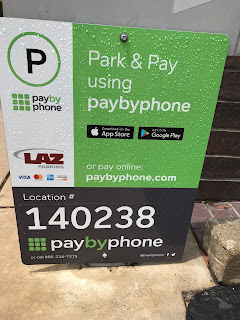 I wouldn't have a clue how to park in this lot