"Get It Done" actually got it done

It is not often that I write an ode to the City of San Diego Maintenance Services.  In fact, this will be the first.  I’ve waited four decades for this moment.

I don’t know who is running the show down there anymore, but the City’s on-line Get It Done app actually, amazingly, seems to get things done.

When the program first launched in May of 2016, I rolled my eyes, thinking this one more Illusion of Help that the city has been notorious for.

Frankly, I had plenty of reasons to be dubious. For example, some years ago there was a tree on city property that was pushing up the sidewalk alongside my house creating a seriously dangerous situation.  I filed a report with the city’s then-fix-it site.

Seven and a half years later, a city crew came out. And instead fixed a much lesser sidewalk problem in front of my next-door neighbor’s.

Historically, there were so many complaints about the city’s appalling inability to fix anything that for a time, the San Diego Union-Tribune set up a hotline where you could post city-related problems that you were unable to get fixed and they would go to bat for you.  But then, for reasons I never determined, the reporter championing this cause disappeared. Moved with no forwarding address? Driven to insanity at the futility of it all?  We’ll never know.

Over the years, I amassed the best collection of San Diego City phone numbers in the entire county. These were numbers that people actually answered as opposed to the ones that were listed in the County phone book or in the newspaper for such services but which rang in perpetuity and never picked up.  In fact, I fantasied that those city numbers actually forwarded to a deserted bunker in Montana.

You knew you had a good number when someone answered with “HOW DID YOU GET THIS NUMBER?” But getting those numbers required considerable guile and cunning, never mind pathological persistence. I possessed all three.

Fast forward to December, 2020.  Right outside our front gate is the access to the water meter for our home. In the 47 years, I have owned this home, I have become adept at removing its cement cover to assess water leaks. Given that our home was built by the lowest bidder after the War, we’ve had plenty of experience with bad pipes.

It’s easy to do. Make sure no water is running in the house (that you know of). Remove meter cover. Avoid black widow spiders who live down there. Take reading. Come back in 15 minutes. If the meter has moved at all, you’ve got a water leak. Tear out hair trying to find it.

The cement lid over our water meter is probably the original one from 1947. Since it is right in front of our gate and fence, you can’t avoid walking on it. I couldn’t help but notice during the fall that the cement was rapidly crumbling around the edges. It was ominously wobbling when you stepped on it too. Sooner or later, but probably sooner, it would completely give way and someone (us?) would break an ankle, especially in the dark.

On December 27 – a Sunday night over the Christmas holiday weekend, I went on the Get It Done app and posted two photos of the problem and our hopes that the situation could achieve some priority.  By “some priority,” I was hoping for 2022.

So imagine my incredible surprise when I went to put the trash out at 7 p.m. – that would be a mere three hours later – and almost fell over a cone covered by a saw horse over the meter cover.  I couldn’t tell whether I almost fell over because I didn’t expect to see it there or because I was so astonished at the rapid service.  Sunday night on Christmas weekend!

But then, I remembered the seven years it took for the city to fix the sidewalk tree root issue. It was great news that the imminent danger was no longer, but how long would we be stepping into the street to go around it just to access our driveway and trash cans?

So imagine my astonishment to come home from a black-market hair appointment a mere three days later to find the cone and sawhorse gone, and a brand-new cement water meter cover in its place.

OK, it wasn’t as though they had to do any cement work or anything.  But still, someone actually showed up and fixed it.

In spite of this recent event, it doesn’t make up for all the appallingly bad service the City of San Diego has provided over the past four decades.  But I am completely and totally dazzled.  With whoever designed this Get It Done app which humans actually look at and act on,

Now if only we could put them in charge of the vaccine rollout. 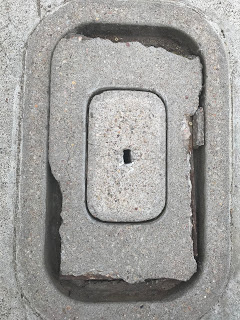 This meter cover was a broken ankle waiting to happen.
And it was right outside our front gate. 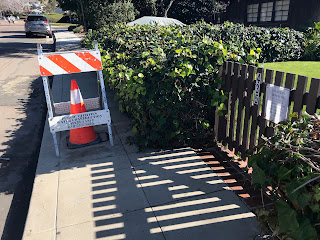 Against all odds, the City came out and put barriers over it the same day! 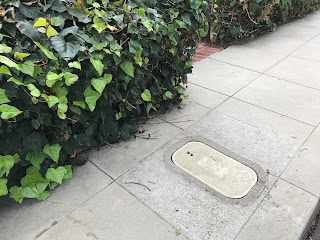 And a mere four days later, a brand new water meter cover!
Posted by Inga at 10:15 AM