The Power Of Love

One advantage of writing a local newspaper column is that you get the opportunity to connect with people you’d otherwise never meet.  Such was the case in early 2018 when I wrote about my husband’s sudden heart attack and how lucky we were that I had just come home when it happened. The fire department arrived four minutes later, the paramedic subsequently noting, “if you hadn’t been here, this would have had a different outcome.”

One of the emails I received after that column was from a woman named Ingrid whose longtime boyfriend (we seniors need a better name for this), Mike, had suffered a heart attack that same week.  Ingrid lived in an apartment complex in the far southern end of La Jolla; Mike and Ingy, the adored 9-year-old yellow lab the two had adopted as a puppy, resided in a home nearby in Pacific Beach.  The three had taken many road trips together over the years, with more than a few jokes from people about the similarity of Ingrid’s and Ingy’s names.

The difference in our stories was that Mike was home alone when he suffered his cardiac event, missing the “golden hour” that saved Olof. Mike could not be revived.  Ingrid described being in the emergency room with him at Scripps Memorial – a place I knew too well – and being given the news.  She asked the ER nurse if Mike, still connected to life support, could hear her and was advised that hearing is the last thing to go. Ingrid leaned in and told Mike how much she loved him, and promised to take care of Ingy.

An obstacle to this promise was that Ingrid’s apartment complex didn’t allow dogs. Fortunately, Mike’s son moved into his father’s home and Ingrid would arrive every morning to take Ingy on a long walk around Pacific Beach, the popular duo becoming a familiar sight to treat-bearing shop owners and residents alike.  The exercise and the companionship were sustaining for them both. Ingrid often said that now, without Mike, Ingy was her source of “joy, happiness, and comfort.”

I continued to get regular updates of the two of them, and we finally decide to meet for lunch – the oddly-alliterative trio of Ingy, Ingrid, and Inga – at the Fig Tree in Pacific Beach which allows dogs.  The quintessentially mellow Ingy slept at our feet, oblivious to the noise and to the presence of her fellow canines.

When Ingrid first contacted me, she also mentioned how touched she had been by my column entitled “Inconsolable” in the spring of 2016 about the death from (ironically) a heart attack of our 8-year-old English bulldog, Winston.  I’m sure there were plenty of world events going on that spring but my husband and I didn’t notice them, so flattened were we with grief over the loss of our beloved family member.  I still cry when I think of Olof standing in the doorway of our bedroom, red-rimmed eyes staring at the now-empty space on the floor where Winston’s bed had always been.

People who do not have pets are often hard pressed to understand the depth of heartbreak and despondence that animal owners experience.  I heard from hundreds of people after that column, mostly dog owners, but cat owners too, and even a woman crushed by the demise of her beloved iguana, Ziggy Marley. Unconditional love is a profoundly powerful emotion – even from an iguana.

I continued to receive photos of Ingy pretty much weekly – she was a hugely photogenic and expressive animal – including her adorably mopey expression as she was sidelined for several weeks with a torn ligament last year.  If misery had a face, this was it.  Even when they couldn’t go out walking together, Ingrid would come over every day while Mike’s son was at work to visit with Ingy. They were such a pair that they were often referred to as a single entity: Ingrid-and-Ingy.

Last month, Ingrid reported that 11-year-old Ingy had been ill with both pneumonia and pancreatitis but was finally bouncing back.  Mike’s son took Ingy to the vet for a final blood test to clear her for walks.  While there, the unthinkable happened. Ingy suffered a seizure and died.

For Ingrid, it was like having her heart torn from her chest. For the first day, she did nothing but throw up. I remembered too well that feeling of life telescoping inward, where one’s desolation is so deep and painful that nothing else matters.

A week after Ingy’s death, Ingrid and Ingy made their final walk together, Ingrid clutching the box of ashes close to her heart as she walked the mile home. She says she cried the entire way.

A friend on their route gave Ingrid a photo she had taken of the two of them on the boardwalk framed with this poem:

You came into my life one day
So beautiful and smart
My dear and sweet companion
I loved you from the start
Although we knew the time would come
When we would have to part
You’ll never be forgotten.
You left your paw prints on my heart.

Ingrid and Ingy on the Pacific Beach boardwalk 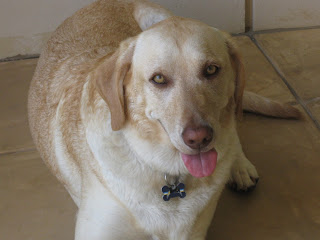 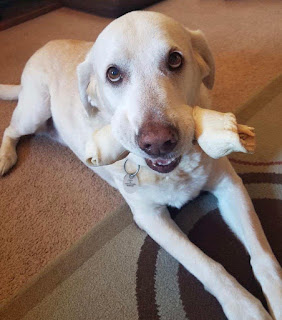 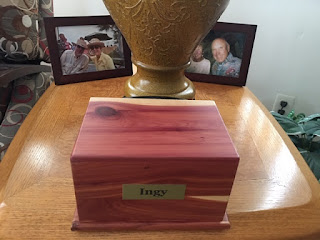