Passing The Time In A Pandemic

February 2020 almost seems like a lifetime ago.  I will look back on it as a time when you could have a preferred brand of paper towels, when reaching for your mask when you got out of your car wasn’t second nature, and popping the trunk for your re-usable grocery bags was. I’ve mastered smiling with my eyes now, not that anyone can see them through my fogged glasses.

In early March, after reading an article predicting that 85% of seniors would contract COVID-19 and 30% would die, I emailed our kids telling them to not even consider coming here if either Olof or I succumbed to coronavirus.  You couldn’t have funerals now anyway.  I advised them to wait until things calmed down then to have a little service in the front yard at sunset with suitable adult beverages and hurl our ashes around.  Important to be safe.

Given my family’s fondness for gallows humor, I should have known better.  Henry replied that if that many seniors expired there wouldn’t be individual cremations anyway.  They'd do us in big batches so he and Rory wouldn't even know which ashes were ours hence he might as well just bring some from their fireplace.  At least he’d know where they came from.

Actually, the subject of cremation has come up before.  My sons had long been threatening to cremate me after my untimely unspecified death with the 65 photo albums – an entire bookcase - that I have amassed over the years.  I just love taking pictures, and might possibly have been (over)compensating for the fact that my parents probably took a total of 20 out-of-focus off-center black-and-white box camera photos of me before I was 18.  My children’s lives would be documented.

But the kids had a point about the albums.  So I decided to make culling my photo collection my Official Pandemic Project.  I’ve tossed a lot of photos but have regularly been mailing off padded envelopes to unsuspecting friends and relatives with the stated hope that they will enjoy re-living the moments that were captured here after which they were free to do with them whatever they wished (other than send them back).

At the mailing place, the clerk would look at my packages and say, “Let me guess.  Photos.”  Adding, “we’re getting a lot of these.”  I’m guessing that before the pandemic is over, the nation’s photo albums will have all shifted one house counterclockwise.

When I brought in two envelopes containing some 500 photos all going to the same address, I asked when she thought they might be delivered.  “I need to know when to stop answering my phone,” I said.

I was always the (self-designated) family photographer, the absolutely most thankless job in the world.  With every picture I looked at in my albums, I could replay the sound track of whining that went into getting everyone to pose for it.  The irony, of course, is that years later, friends and family would look at these pictures and ooh and aah over them with delight.

My younger son just turned 40 and managed to squeak in the last birthday party in America in March before everything shut down.  I provided a selection of photos of him and various high school friends who were attending that I had taken over the years and got back rave reviews from the guests (and even Henry).  So it made up for my about-to-be daughter-in-law’s comment in 2007 when she wanted some photos of Henry growing up to use for a wedding slide slow and I pointed to the bookcase.  “I hope this isn’t hereditary,” she said.

Olof, meanwhile, continues in his own pre-pandemic project, a frenzy of sourdough baking, now branching into crackers, naan bread, and raisin varieties.  But he has now also decided to re-live his Air Force pilot days by acquiring an actual flight simulator with 42-inch screen, instrument panel, joy stick and head set, only just delivered.  Where all this is going to go in our tiny house I’m not sure, but it will allow him to fly pretty much any kind of plane anywhere.  Presumably, if he’s flying a 747 to Paris, he’ll have to put it on autopilot over Greenland to go flip the English muffins.

Meanwhile, the aloe vera gel I ordered in March to make my own then-unavailable hand sanitizer has finally arrived by slow boat from China. Not needing it for hand sanitizing, I looked at the label, clearly translated using a 1995-era auto-translator, for other suggestions for its use and was advised it was good for “repair the skin after basking and then to promote healthy and smooth.  First take proper amount and then paint the harmony with right massage action until the nutrient absorbed good for common use.

Actually, I can’t think of better advice for our times than that. We all need to paint the harmony with right massage action. 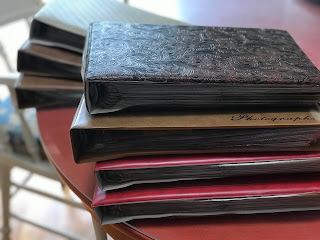 Slowly working my way through dozens of photo albums 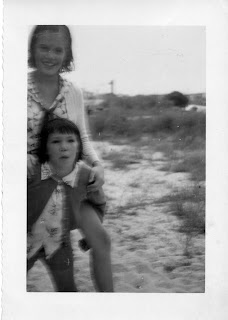 Typical example of my parents' non-existent photography skills
(me at top, sister on bottom) 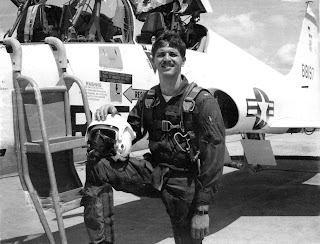 Olof decides to relive his pilot days by acquiring a flight simulator
(cheaper than buying an airplane, but not by much)
Posted by Inga at 11:36 AM