I am lucky enough to have the legacy of parents who were truly kind people and never missed an opportunity to jump in where needed.  So when Olof and I realized that a disabled friend with no local family desperately required assistance, we volunteered to help. And thus began the saga I call will Refrigerator Wars. It could easily be five columns but here’s the abridged version.

Our friend has 24/7 caregivers.  His refrigerator stopped working. An ancient behemoth, it was ultimately deemed not repairable, despite multiple part replacements over several days.

This was the news I dreaded.  Every appliance repair person who has ever looked at that refrigerator has said, “How on earth did that thing ever get in here?”  My husband wryly opined that it must have been manufactured on site.  It was a commercial-grade built-in refrigerator that wasn’t actually built in.  I’m sure our friend got a great deal on it.

While lots of places have removal services for an old appliance when you buy a new one, there was no way any delivery service was going to tackle getting this massive fridge out of there.  So I hired multiple handy persons who each worked considerable hours, said they’d be back the next day to finish the job, and were never seen again. One, I learned later from the caregivers, actually used a sledge hammer.

There was fortunately a kitchen door on this 1929 house. Unfortunately it was 28 inches wide and had not only been painted shut but the lock mechanism broken in the lock position.  All other avenues to remove this refrigerator were even more impossible than the kitchen door.

The final set of handy persons succeeded in dismantling this refrigerator and removed it in 26 component pieces to the porch through the newly-unstuck re-locksmithed kitchen door.

I’d pre-selected a replacement at Home Depot only to find that any fridge I wanted was on three-week back order and one-week delivery delay. However, a nearby outlet store said they could indeed deliver the next day and provide take-away service for $90. They wouldn’t let me use my friend’s credit card (probably good news) so I had to buy it.

The next morning I was over there at our friend’s house at 7:15 a.m.  waiting for the delivery guys.

At 8:40 a.m., a truck pulled up and three teenagers who seemed at most 15 jumped out. I asked them to confirm that they were taking away the refrigerator (pieces) that were on the porch.  Head Teenager says his paperwork doesn’t say anything about taking away the old refrigerator so he can’t do it. Do I want the new one or not?  I am really tempted to say just take it back but the caregiver is looking at me imploringly.  They’ve been without a refrigerator for over a week.

Head Teenager calls Customer Service who tell me that “someone will contact me later in the week” about picking up the old fridge.  Translation: I will never hear from them again.

Not surprisingly, getting the new fridge in the 28-inch kitchen door requires heroic measures but to the Head Teenager’s credit, he ultimately gets it done.  Caregivers are ecstatic.

11 a.m.  Once home, I call the outlet place and ultimately get Mark, the manager, who promises someone will be out to pick up the old refrigerator tomorrow “at the latest.”

11:30:  Mark calls back.  A problem. I didn’t tell the salesman that my old refrigerator was a built-in (even if it wasn’t actually built-in).  They don’t pick up built-ins.  I need to call a company who will send out a four-man crew which I would have to pay for.  I tell him I have already had it removed from the house onto the porch and that its component pieces need to be moved all of ten feet onto a truck.

Mark also says the delivery kids told him there were “six steps” up to the porch.  I reply that the delivery kids are obviously products of San Diego public education and that there are actually two. Mark suggests that the best solution would be that they refund my $90 removal fee and I find some other [clueless idiot] individual to take it away for me.  Would that be acceptable to me?  Me: Hell no.  You guys are going to come get this refrigerator.

1 p.m. Mark calls and says he is sending a crew later that day to pick up the refrigerator.

9 a.m. Day 9: I go over to the house first thing with 26 strips of paper on which I have printed “refrigerator part” and tape them to all the assorted parts so there can be no mistake.

11:30 a.m. Caregiver calls:  Truck has come and taken away the refrigerator including all its component pieces! 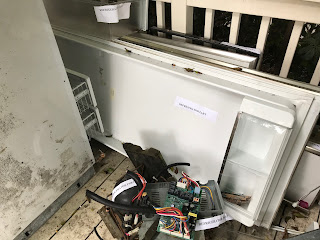