A while back, I wrote about how Olof and I were engaged in dishwasher wars now that he had taken over this chore in retirement.  Three-plus years later, after considerable discussion and negotiation, I would like to report that…nothing has changed.

As I noted when I first wrote about this issue, it goes against my feminist sensibilities to stand in the way of a man loading a dishwasher.  But it makes me crazy that he runs it half full. I could easily get three more days’ dishes in there.  As you might guess, our definitions of “half full” vary considerably.

I think we’d all agree that if a family member – particularly a husband family member – takes over a household chore that one has to step back and let them do it their way.  Even if their way is TOTALLY WRONG.  It annoys me to waste so much water, so much energy, and so much wear and tear on the dishwasher.  As much as women want household help from their husbands, it is very hard for a wife to ignore what her husband might unwarrantedly call her “inner control freak.”

Now, it might be easy to wonder about Olof and me: “Do these people need a hobby?”

Another issue is that for reasons known best to Olof, the dishes are so clean by the time they’re loaded they probably don’t need to be run at all. Since I’m still the dishwasher unloader, I couldn’t help but comment that if you can’t tell whether the dishes are clean or dirty, some of us could give them the benefit of the doubt. The only way I know the dishwasher has been run is that Olof puts a Swedish moose magnet on the front when he pushes “Start.”

Olof has always maintained that he picked after-dinner clean-up as his retirement chore partly because he read that, in recorded history, no man has ever been shot by his wife while doing the dishes.  He never said so out loud but he was also apparently never all that happy with the job I did with them either. (We can put someone on the moon but we can’t invent a machine that cleans the counters, stove top, and sink too?)

As I frequently noted to him in our dating years, life is all about priorities. The kids seemed to be turning out well. So if the dishes got a little furry sometimes during warmer weather, so be it. That’s what the fur, er, superwash cycle on the dishwasher is for. Astonishingly, Olof married me anyway since Olof is not a furry dishes kind of guy.

Now, you’d think that four years into the dishes gig, he’d have this down to a pretty quick routine.  But he spends at least a half hour doing the dishes just for the two of us. A champion power-loader during my 12 years as a divorced working mom, I always had that sucker loaded up in four minutes flat.

I truly feel that spending a half hour on kitchen cleanup is time that could be used far more wisely. Like reading War and Peace with a snifter of Laphroaig. Or in my case, People with a glass of chardonnay.

When Olof is done, the stove top is spotless, the granite counter tops positively sparkle, and you could be blinded by the shine in our stainless-steel sink. And then – listen to this - he sweeps the kitchen floor. Whether it needs it or not. As you might guess, our definitions of  “needing” vary as much as our definitions of “full.”  Olof will sweep whether you can see a single crumb on the floor.  “Part of the job,” he says.

In my defense, it’s not like I never sweep.  Just recently I dropped a box of breakfast cereal on the floor which was more than I thought the dog could – or should – eat.  As I was sweeping it up, Olof happened to wander into the kitchen.  “Whoa!” he said, in mock astonishment.  “I didn’t know you knew how to use that thing!”  (He doesn’t know that he’s getting a brand-new broom for his birthday.)

Recently our 18-year-old Bosch dishwasher finally went to the Big Appliance Warehouse in the Sky.  Now we can probably thank the Bosch company at least somewhat for the longevity of this machine, but I contend there is another good reason why it lasted so long.  I only ran it when it was full.  Very very full.  Full being defined as you couldn’t see the bottom of the dishwasher anywhere (or even the racks.)

Ultimately, we went with another Bosch which Olof is still waaay underloading and which I am still biting my tongue as I unload.  But after four years, I might have to concede that this might not be a winning battle. Might. 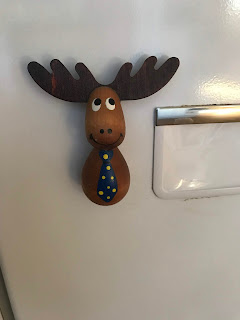 Olof pre-washes the dishes so thoroughly that unless he puts the
Swedish moose magnet on the front of the dishwasher, I have no idea
whether he ran the machine or not.
One might ask: does it matter?