Recently, my husband Olof and I made our first official foray out of town since his heart attack in January to attend Grandparents Day at our grandson’s school.

Let me say that Grandparents Day is a phenomenon totally new to me.  Olof and I and the kids all attended public schools so we were unfamiliar with the rituals of private education. My son and daughter-in-law had been profoundly underwhelmed by their local public school and finally decided to make the financial sacrifice to go private. If they lived in La Jolla, they said, it would definitely be public school.

I have to say that Olof and I initially assumed that the purpose of this event was to hit up the grandparents for money. This is our grandson’s first year at this school and we were solicited for donations three times before Thanksgiving. After the third, I emailed my son, Henry: “Did you sell our address to these people?”  He replied, tongue-in-cheek, “They offer a 25% discount to any student with grandparents in an upscale zip code.”

Unlike public schools, who would be thrilled with a donation of $500, the bottom of six tiers of donations for this school was “Under $1,500” which would merely identify us as embarrassingly cheap. We never received a fourth request.  We were genuinely expecting that the topic of money might be revisited when captive physical bodies were on campus.

But nope, it was all about giving the grandparents a nice experience. Upon getting our pre-printed name tags, we were ushered to table upon table of amazing pastries (next year I’m bringing a large handbag to stuff with those fabulous chocolate croissants) from a high-end L.A. bakery.  I texted Henry a picture of one of the tables with the caption: “Not in public school anymore, Toto!”

Among the entertainments was a musical program in the auditorium.  The performance was truly outstanding, but then, it is one of the school’s signature programs.  Usually with a grade school orchestra, you think they’re doing well if you can actually identify the piece of music. But these kids were dazzling. The fourth graders were singing in three-part harmony.  There was choreography. Not much resemblance to the charmingly off-key Spring Sings I remembered. But it doesn’t come free.

Not surprisingly, all the songs were “message” music with themes from saving the environment, to championing the equality of humans of all races and creeds, and ending with a rousing rendition of “Circle of Life” by the school’s stunningly talented choir.  Let me just say that they were themes that can’t be emphasized enough these days.

We got to visit our grandson’s kindergarten classroom and let him take us on a tour of the gorgeous grounds. A catered lunch was served. Olof shared my feeling that we had been transported to an alternate but very lovely universe.

Speaking of alternate universes, I have to confess that sometimes L.A. seems like a foreign country to me. Back at the house after Grandparents Day concluded, I asked our three-year-old grandson if that was E-damame he was eating.  He looked at me said, “ED-amame, Mormor.” OK, looked like soybeans to me and I was pretty dazzled that his mother got him to eat it.  But he was chowing it down like it was MacDonald’s chicken fingers, which I might add, was pretty much the only thing his father would eat until he was ten.

Another new phenomenon for us: our son’s house has all manner of electronic stuff like Alexa, the Amazon robot thing that does everything but… no, I think she really does everything.   One thing Amazon might not have thought through, however, was the problem of Alexa Abuse by three-year-olds. Most preschoolers aren’t used to having much power over anything and our grandson delighted in relentlessly ordering Alexa around then cackling hysterically as she attempted to keep up with his commands.

“Awexa! Pway “Baa baa bwack sheep!”  Poor Alexa wouldn’t even get to as far as “Have you any wool?’ before our grandson commanded her, “Awexa! Pway “Twinkle twinkle widdle star!”  Unfortunately, Alexa 1.0 doesn’t isn’t programmed to respond to the command from his mother, “Alexa! Ignore voices of persons under five!” - clearly a needed upgrade in 2.0 – but she will respond to mom’s command, “Alexa! Stop playing music!”

I can’t even imagine the chaos if someone in the family is actually named Alexa.  (Can you get one named Bob?)

I tried telling Alexa to play Vivaldi’s Four Seasons but the three-year-old cut it off seconds later. Just like those GPS robots that start to sound positively surly if you keep ignoring their directions, I could swear Alexa wanted to say, “Would you guys make up your effing minds?”

But altogether a very successful trip.  Glad to be back out into the world again.  And our grandson’s school didn’t ask us for dime.  Or maybe our reputations had preceded us. 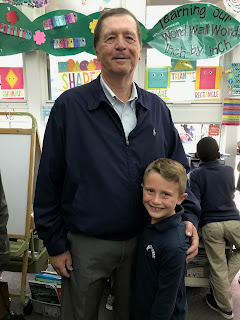