The Scourge of Home Ownership

There are times when home ownership feels like the worst idea ever.  Like, for example, when you have a difficult-to-diagnose problem that you just know is going to suck up endless amounts of time and money and still may not get resolved.  Such was the case recently when we noticed smudgy spots on the walls of our little reading room.

Now the problem with “smudgy spots” is that you can’t go on Home Advisor and search “Fix smudgy spots” especially if you don’t know what the smudgy spots are.  What they looked like were tiny grandchildren palm prints which would have made great sense if they didn’t start at the five foot level of the wall and go to the ceiling. As resourceful as the grandtots are, they don’t yet do ladders.

Of course, it was the holiday season so we worked diligently at ignoring the smudgy spots which, to be fair, were more obvious in some light than others.  So I tried to be sure not to have the lights on in any way that I could actually see them.  Dedicated Denial is a strategy that many homeowners develop over time, us among them.

I was kind of hoping I was imagining them.  Olof, after all, hadn’t said anything.  So I finally pointed them out hoping Olof would say, “What smudgy spots?” But like me, he had been working overtime not to mention them. It’s one of our many compatibilities.

After the holidays, it was obvious they were getting worse.  It really didn’t seem to be mold.
When your Mr. Clean Magic Eraser doesn’t help, you know you’re in trouble.

Fortunately, our long-ago kitchen contractor was still in business. He felt that there was moisture coming down the back of the wall even though it had not rained a single drop in four months.  He recommended a roofer come out and look at it despite the fact that our roof had been replaced in 2010.

There are few words that strike more fear in home owners than “roofer.” (OK, toxic mold.) But the roofing guy came out, wandered around for a bit on our roof, and came back down with a slide show he had taken with his cell phone. Flashing had separated from a vent, and there were also several nails holding flashing down that had come up.  Some fresh caulking would be required as well.  His estimate for repairs:  $200.

Olof and I tried to contain the paroxysms of joy we felt that we might be getting out of this for $200 even though the reading room – and likely the living room since they are really all one big space – would have to be repainted. But with the right lighting, that could be ignored for another two years.

As I’m writing the roofer a check, he mentions that the roof vent next to the flashing has a big hole in it, which is likely letting creatures take up residence in our attic.  We just had all our roof vents replaced with new screening five years ago, but as we know too well, local rodentia are not dissuaded by mere window screens.

When we got the handyman out to replace the vent screen, we suggested he check all of them.  As it turns out, all but one vent screen around the roof line has been chewed through.

I felt really annoyed at the rats about this.  Once you’ve chewed through one vent, is it really necessary to chew through all of them?  Are you that lazy that you can’t slither five feet to the left and go into the one you’ve already gnawed?  Or, maybe rats have developed a taste for vinyl-coated fiberglass  (local mutation?)

As for the one vent screen still intact: Years ago, we had had the vector control/rat slayer people out and while they don’t remediate your rat problem for you, they’re happy to tell you how you can do it yourself.  (You pay for this service on your tax bill.)  One of their suggestions was to put up window screening then spray it with a goopy foam substance so the rats can’t chew through it.  After we did one, my husband Olof had some misgivings about this, pointing out that the reason you have attic vents is so that you can get actual VENTilation in your attic to prevent mold. So for the rest, we just had screening material put up, naively thinking this would slow them down.

$360 later, all ten vents have been replaced with heavy gauge steel mesh which we have no illusions the rats won’t ultimately chew through. But we’re hoping it will give them indigestion.

But then I had a sudden, terrible thought: “Do you think we might have trapped any rats inside?” I said to Olof.  The color drained from his face: “Do NOT even say that out loud.” 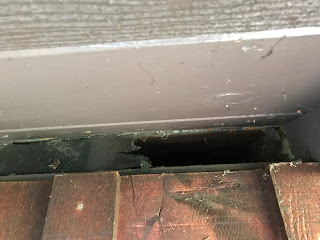 Rodents had chewed through all the vents around our roof line 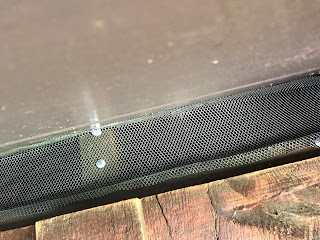