A few months ago, I wrote about the dead possum that died under our house the day before Thanksgiving, its mephitic miasma threatening the holiday meal. Until a local pest control company saved the day by locating and removing the noisome decedent, I had assumed it was a dead rat in the wall.

The same day, by coincidence, my Christian Scientist friend Virginia, who likes to send me inspirational items, emailed me an article about boosting your gratitude by adding the words “well, at least it wasn’t…” when things don’t go as planned.
Known in psychology terms as “downward counterfactual thinking” this is, of course, not a new concept. My now-deceased former Jewish mother-in-law’s life philosophy, phrased slightly differently, was always “Well, it could be worse.” As a Russian immigrant refugee, whose parents and nine siblings had  fled across the border in the dead of night with only the clothes on their backs, she was well aware just how worse things could be.
I replied to Virginia: Good timing Virginia. A creature has died in the wall of my kitchen. Stinks to high heaven. Family all coming for Thanksgiving tomorrow. Well, at least it didn't die in the wall of the dining room!
When our dog, Winston (who has intractable ear infections, a heart condition and massive allergies) had eight seizures in one day, I said to my husband, “Well, at least he doesn’t need ACL surgery!” (another common bulldog problem).
No matter how bad my day goes, I’ve found I can’t go wrong with: At least I’m not a Syrian refugee!
But sometimes life affords an opportunity of flat-out positive gratitude, no “at leasts” necessary. Such was the case a few weeks ago when I walked out of Staples in Pacific Beach with an armful of packages into a sudden downpour. It didn’t look like it was going to let up anytime soon so I decided to make a dash for my car. I hurled my purse and packages into the front passenger seat and jumped in, quickly slamming the door. As I put my car in reverse and started to back up, someone started knocking frantically on my window. When I rolled it down, a very wet security guard who had been standing outside the credit union was holding my iPhone in his hand. “It fell out of your purse when you got in the car,” he said. “You were about to run over it.”
You want gratitude? I couldn’t believe my good fortune. There are few things I would rather do less than get another phone set up. I’d sooner have a root canal. Brain surgery. A dead possum under my house the day before Thanksgiving. The current one took weeks with multiple visits to the Verizon store on Pearl. They have my picture with a line across it in their back room. No, really, they do. I HATE technology. But like everyone else in America, I’ve become dependent on the stupid phone.
The poor guy was getting soaked, so I quickly grabbed my purse. “Please,” I said, “I’d really like to give you a reward.”  But he refused, and ran back to his covered perch outside the credit union.
Afterwards I thought of all the more likely possibilities. It’s pouring. He’s a credit union employee not a savior of cell phones. Watching the idiot lady run over her pricey iPhone could have been a source of all manner of fun stories with which to regale his friends. The delicious crunchy sound of bytes biting asphalt. Siri’s frantic final screams. (That I would have liked to hear. I loathe the little robot.)  But he ran out in the rain and rescued my phone at the last possible second. When I got home, I sent a letter to the manager of the credit union recounting the story and lauding the character of their security guard, Charles.
I’m at that shopping center pretty frequently. The next time I was there, I thanked him again and he thanked me effusively for the letter to his boss. And now, I stop and chat every time I’m over there. Not too long; he’s on duty.
Bad things happen. But at least Charles was working that day. 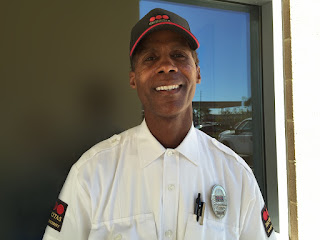