*Walking On The Wild(life) Side


I was walking on a fairly deserted section of beach on a weekend day morning recently when I came upon what looked like a dead sea lion pup lying on the sand. But a few moments later, he half-opened his eyes and lifted his head toward me in an unspoken but absolutely clear message:  Please help me.

Local papers, including the La Jolla Light, have written a number of stories this year about the puzzling increase in beached sea lions: according to the L.A. Times, more than 2,000 along the California coast in the first three months of this year. But the sickly little guy I was looking at didn’t care about statistics; he couldn’t move another inch.

A recent Light article had advised people not to call 911 if they encountered a beached pinniped and instead listed the number of the Sea World Rescue Hotline (800-541-7325) which I had added to my phone. A few months ago, I had come across a large injured shore bird on the beach and didn’t have a number to call. A serious bird lover, I vowed that wouldn’t happen again.

Our home, with all its hanging feeders, has long been a bird sanctuary (or depending on how you look at it, a cat feeding ground.) Some of the wild jays who frequent our property would eat right out of Olof’s hand at our patio table. We’d also been bequeathed Rory’s outdoor aviary of cockatiels when he went to college. So it probably wasn’t too much of a stretch some years back when I talked Olof into becoming a volunteer with me for the songbird team of a local wildlife agency, taking care of batches of orphaned baby finches, sparrows, blue jays, etc. most of whom had had ended up on the ground after tree trimmers cut down their branches. People had been bringing us injured birds for years, so we figured we might as well know what we were doing.

We were put through our paces by the wildlife agency trainers (or the “bird nazis”, as Olof  affectionately called them, due to the intensity of their commitment and what he perceived as their inability to impart 20 minutes of information in less than two hours, which drove him completely nuts.)  But we graduated (I had to whack Olof a few times with the syllabus to get him to behave) and were now an official Dept. of Fish and Game Substation.

We soon got our first group of week-old baby birds, who had to have a goopy mixture of cat food (the irony) and Gerber’s beef baby food syringed into their ever-gaping gullets every 30 minutes from sunup to sunset. Later they got worms (yuck) and assorted fruits and veggies. They’d stand on each others’ heads trying to beat their siblings out for food and sometimes even hoard it in the corner just so the other guys couldn't have it. I kept asking myself, “where have I seen this behavior before? Oh, yes – the kids!”

Per regulations, a room in our home (absent a garage, Henry’s room since he was away at college) became a (posted!) Department of Fish and Game Satellite Facility requiring a yearly inspection of the facilities.  As I told the inspector, the room had been previously occupied by wildlife for some 20 years, although not always with the level of cleanliness that it now boasted.

Fortunately, I had a job where I could bring baby birds to work. My co-workers helped feed them if I had to attend a meeting, noting that all the chirping made for a soothing sylvan atmosphere. (Callers asked, “Are you in a forest?”) My boss, however, an avid hunter, referred to them as “the finch tacos” and said it was a good thing they didn’t have much meat on them.  Well, I said, I could always switch to the Raccoon Team…   By about seven weeks, the birds were ready for Birdie Graduate School, a huge flight cage where they’d hone their flying and worm excavation skills for two weeks before being released back into the wild.  We’d always try to give them an appropriately enthusiastic send-off. (“Watch out for cats!  Go for the tall trees!  Don’t call home collect!”)

As an interesting side note, I always knew that my grandmother (who died before I was born) earned a Ph.D. in zoology in 1910. What I learned from a relative during my volunteer tenure was that her specialty had been ornithology, and particularly, song birds.

Olof and I were well into our second six-month baby bird season when my career as a savior of sparrows came to a precipitous end. Someone at work complained about my birds (my boss?) and the administration nixed animals in the workplace. But I have fond memories of that time.

As for my sea lion, I was amazed and delighted to get a call from Sea World several hours after they’d retrieved my moribund pinni-pup, reporting that he had indeed made it, and was responding well to treatment. So keep this number handy, folks. And people who want to write to me and say this is just the cycle of nature and I should have left him there to die, save yourself the trouble. It made my whole week. 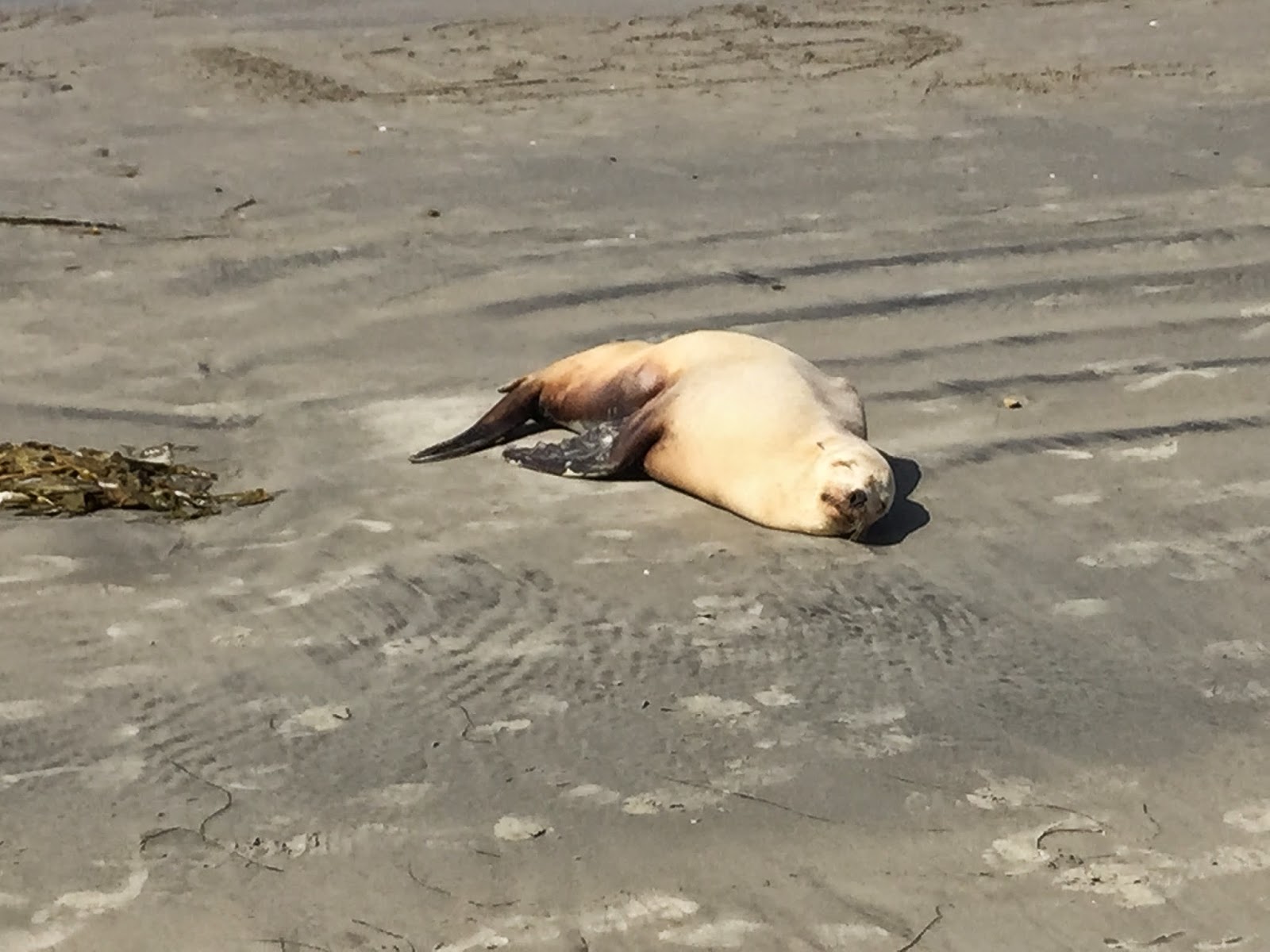 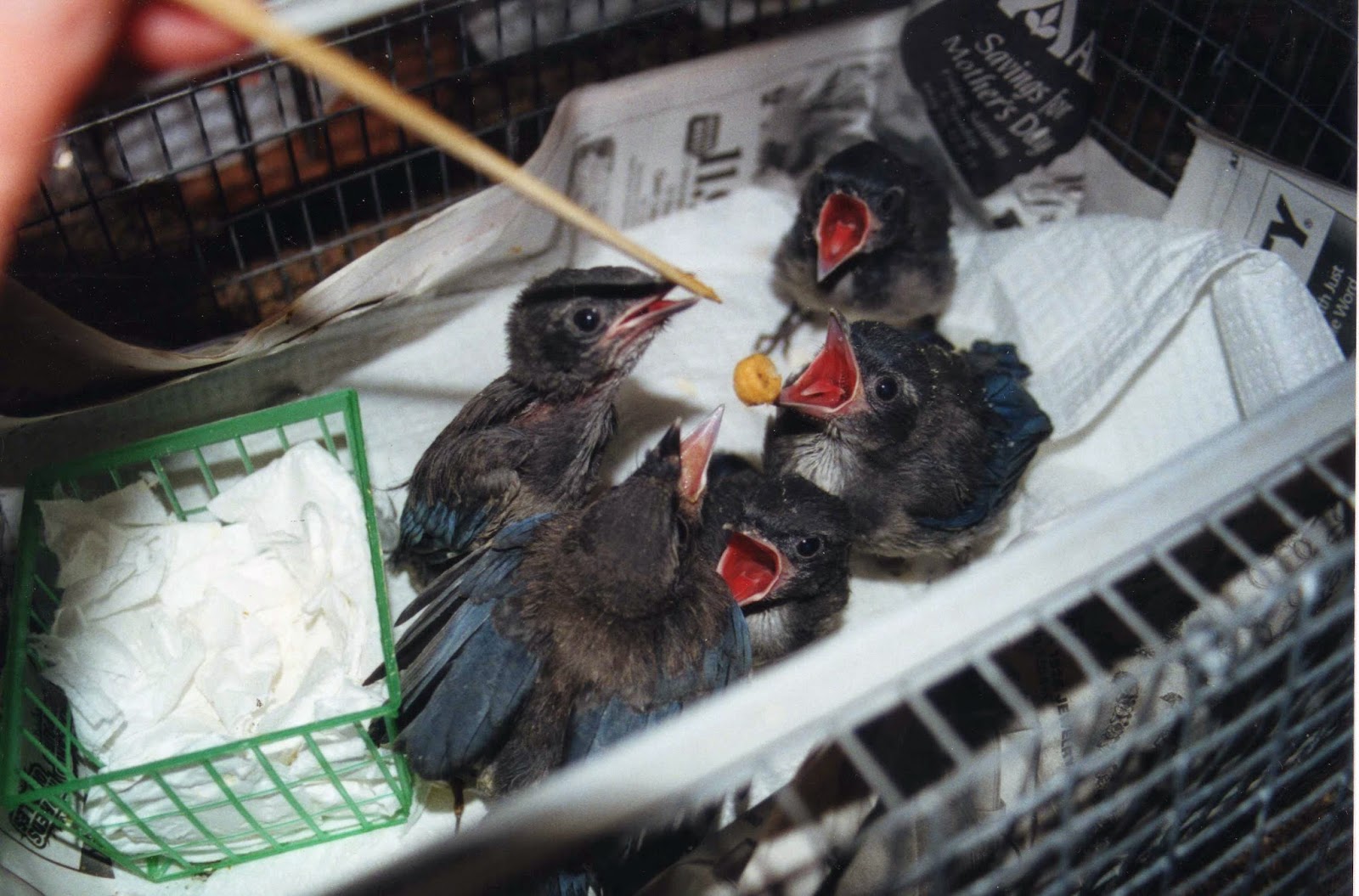