As your first and most beloved child (OK, I realize the next three are actual humans), I wanted to update you on how I’m doing here at Camp Grammy and Grampy. Grandma has noted aloud that my sojourns here keep getting longer and longer. A kennel, however, would be unthinkable for a canine of my sensitive nature and exacting requirements.

There's been plenty of sunshine here in La Jolla so I'm usually out baking somewhere - on the grass, on the bricks, or even my new favorite place, the nice warm dirt by the orange tree. Then I like to come in and rub my filthy body on the cream-colored leather sofa in the living room. Grandma thinks the leather cleaning people have me on their payroll.


Keeping grandma and grandpa’s house safe for democracy has, as always, been a full time job. It’s pretty much always DEFCON 3 here with the garbage trucks on Mondays, the lawn mowing guys on Wednesday, and the pool guy with that big scary pole on Thursdays. I exhaust myself with frenzied hysterical barking but still they persist in coming.
Now there are new threats to the household. Who knew that the toilet plunger in the guest bath could have been taken over by malevolent forces?  I snarl viciously at it to let it know that its behavior will not be tolerated. Grandma will finally come in and hide the plunger in a closet (vanquished!) I am sorry to report that grandma and grandpa continue to be clueless as to the dangers in their midst.


When I arrived this time, grandma had acquired a new feeding station with high sides. However, I still manage to hurl the occasional piece of kibble out on to the floor and then drag it into the carpet in grandma and grandpa's bedroom where they step on it in their bare feet and say bad words. But it's not nearly as easy as the old feeding tray where I could usually fling 30 pieces of kibble a day out onto the floor, never mind create a minor tsunami of water.
If there is one thing I don’t like about La Jolla, it is that it is the allergy capital of the world, infinitely worse than our house in L.A. I am constantly fighting infections. The folds in my face, never mind the inside of my silky ears, need to be cleaned daily, a process I cannot abide. Grandma and grandpa’s La Jolla doggie doc says they had a slogan when she was doing her training: Buy a bulldog: Support a vet. Worse, I overheard Grandpa muttering that for what they’ve spent on my care, they could buy a whole new dog.
A reader of grandma’s told her that there is a new miracle drug called Apoquel that works wonders for bulldogs of my allergic persuasion. Unfortunately, it is more expensive and harder to get than heroin. I’m on a waiting list for it (hopefully October?) which cannot come too soon. Grandma has been fantasizing about breaking into a local veterinary office that is rumored to have some.
The number of pills they stuff into me daily is positively ridiculous. I do NOT like taking pills – Benedryl, assorted antibiotics  - which don’t seem to work anyway. I no longer accept pills hidden in pet store pill treats, cheese, salami, tuna, and even hamburger. They’ve still been able to get me to take them wrapped in fresh sliced deli turkey breast. But don’t even think of trying the packaged stuff. I do NOT do cheap cold cuts.
I have developed a cunning system of swallowing the piece of turkey then spitting the pill out on the kitchen floor. I always leave it in a prominent place just to make a point.
One of my favorite activities here is to stuff toys under the sofa and carry on until grandpa or grandma fetch them for me. (They are so trainable.) I also enjoy lying on their feet so they can’t get up. This is not an activity I get to do at your house since, with three kids under six, you never sit down.
Grandma and grandpa continue to be under the spell of my charms. I'm getting lots of rubs, toy tosses, and attention, which is, of course, my due. I'm an insanely attractive animal (regardless of the cruel things people say about my underbite), and have perfected all my laughingly adorable faces on them. When I tilt my head to one side and lift my paw, they are powerless against me. When I flatten my ears to my head and look up at them piteously, they think I am genuinely sorry for puking on the rug.
Missing you and my “sibs,”
Yours in perpetual slobber,
Winston 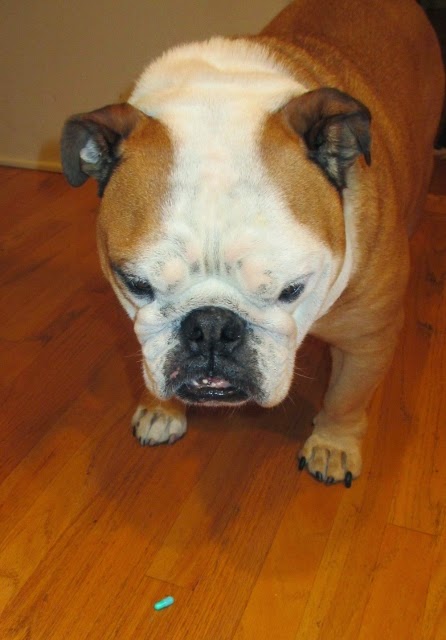 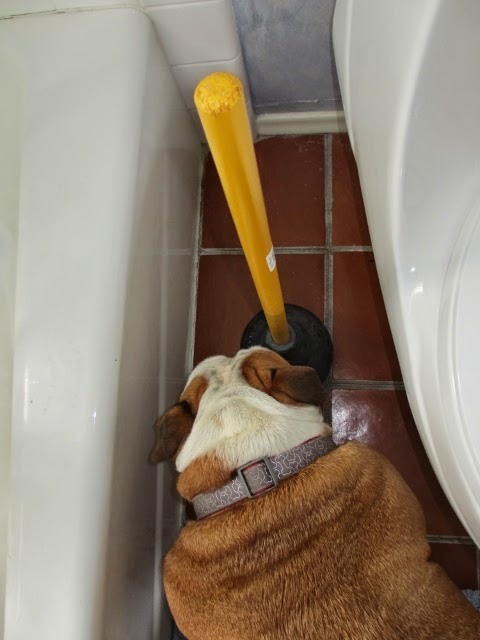