April 12, 2015 will be the 60th anniversary of the announcement of the Salk vaccine’s ability to prevent polio. Had it been available at your local CVS like flu shots are today, they would have had to call out the National Guard to handle the stampede. In the early 1950’s, there was no diagnosis more terrifying to parents than polio. In the 1952 epidemic, nearly 58,000 cases were reported, 3,145 people died and 21,269 were left with varying degrees of paralysis. There wasn’t a parent in America who would have requested a “personal belief waiver” to exempt their child from that shot.
In truly unlucky timing, mere months before the vaccine became available in my community that fall, my siblings and I contracted polio during a trip to the family homestead in rural Ohio. (Likely cause: swimming in a contaminated creek with polio cases upstream.

My parents were, of course, beside themselves. The little boy who had been in the bed next to my sister in the polio ward was in an iron lung the next. Anything bought to the hospital could not come home again so there was not even the comfort of a favorite toy or blanket.

As with all such cases at the time, we kids were quarantined. Reading about the cases of people who suffered a similar fate after Ebola exposure a few months ago, I had a sudden flashback to the summer of 1955. It is so not fun being the local pariahs.

Oddly enough, my parents weren’t quarantined although my mother might as well have been. Her “help wanted” ad would have read today like: “Sitter for three kids recovering from Ebola. Probably not still contagious?”


Polio aside, in my childhood, there was no hope of avoiding measles, mumps, chicken pox and rubella (German measles) – miserable afflictions that I would never have wanted to inflict on my kids. (All but chicken pox had vaccines by the time they were born.) There could also be serious lasting repercussions to these illnesses: our pregnant neighbor who contracted rubella (German measles) whose baby was born with severe birth defects; cases of deafness following mumps; encephalitis from measles. The curvature in my spine (and decades of back pain that has gone with it) is likely from polio. When rubella came around again, my mother sent me to the home of a friend who had it to be sure I’d contracted it well before my child bearing years.


A new generation of young parents have never personally experienced diseases now preventable by vaccines. That’s both the good and the bad news. I guess for some, it’s easier to fear the autism spectrum they actually see.
But I wish every parent who doesn’t vaccinate their child could travel back to a 1950s polio ward full of kids in iron lungs, or watch children suffer horribly – and sometimes permanently – from  now-avoidable afflictions. I recently read an interview of a woman who said that in lieu of vaccinations, she was feeding her children a totally organic regimen so their immune systems would be able to resist infection. Seriously? As my parents knew too well, a healthy diet and wishful thinking just aren’t going to do it. 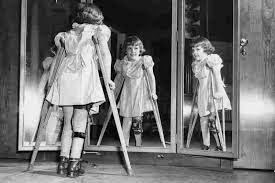