Well, it looks like the much-hoped-for El Niño is going to be a no-show, and I couldn’t be more disappointed. I don’t think there is a single Californian who wouldn’t like to see the end of this really scary drought. I was really hoping we could get a good El Niño-produced soaking à la 1982-83 or 1997-98 and be done not only with empty reservoirs and declining snowpack, but the stringent new watering rules that took place November 1. My husband says that pretty soon, if we want a shower, we’re going to have to be standing in our front yard sprinklers during our seven minutes of alternate-day watering time.

While pondering our absentee El Niño, I couldn’t help but reflect that despite all the eco-disaster flicks that have come out over the last decade, there’s never been one specifically about El Niños. How this is even possible baffles me. I’d therefore like to propose:

Now, if we're going to stay true to the genre of disaster flicks, we’d need a studly youngish (now that I'm over 50, youngish could be 40) scientist who has eschewed financial gain throughout his career in his quest for Truth. We also need a totally miscast famous actress to play the dishy post-doc. Pamela Anderson would be good for this role as she could spend the better part of this movie out in the drenching torrential El Niño rain in a very wet T-shirt. Once we've got Pam, we wouldn't need any more plot as no one would be paying attention to it anyway. But I'd feel morally compelled, for science and art’s sake, to provide one anyway.


The nice thing about El Niños is that rather than have just one big disaster (like an earthquake or tornado), we could have multiple, increasingly devastating storms. Pam and The Scientist have to figure out how to stop this weather pattern before Tampa sinks like Atlantis. The equatorial Pacific waters are getting warmer and warmer, the storms bigger and bigger. But why? Pam, whose character at 23 is already a world famous marine biologist specializing in whale sounds, knows that the whales are trying to tell us something. But what? Well, duh: Eco-terrorism of some type is obviously at work. None other than the Most Unpopular World Figure du Jour has been conducting evil underwater experiments heating up vast quantities of the ocean's water with world-wide repercussions. When this El Niño is over, Las Vegas and Cleveland will be coastal cities. (We'd need the obligatory shots of the President being evacuated just before White House sinks beneath the waves.) I see a series of montage shots of different countries around the world succumbing to whatever it is El Niño does to their particular climate since, annoyingly, not every climate is affected by El Niño in the same way.


We'd also need the idiot insensitive bureaucrats from Washington refusing to believe Pam and The Scientist, even though Pam testifies passionately before both houses of Congress that the whales have no reason to lie. (Unfortunately, she was in such a hurry she didn't have time to change out of the wet T-shirt so nobody listens.) So Pam and The Scientist have to come up with Evidence on their own. I kind of envision Pam doing a deep sea version of those Shamu show dives on the back of a whale; she takes pictures that finally convince the Washington Bureaucrat/Idiots that what she is saying is true. At this point, we can call in the Marines, the Seals, run up the flag, etc. to wipe out Most Unpopular World Figure du Jour and his evil experiments.


But what about all this still-incredibly-warm water? Another monsoon is about to clobber the U.S. (the only really important country when you get right down to it). The National Oceanographic and Atmospheric Administration (NOAA) suggests dumping huge quantities of ice cubes into the equatorial Pacific to try to quickly cool it down but our Scientist comes up with a much more brilliant - but of course highly risky - solution to the problem (which I don't know yet because I'm not a scientist but can guarantee will be ridiculously implausible) which he and Pam single-handedly execute and save not only the U.S. but what’s left of the world! Early on, we'd learned that The Scientist had been plagued by some major, but vague, trauma from his formative years. In the process of saving Mankind (except for those dispensable countries we’d already seen float off in the direction of Antarctica), he has a personal epiphany, and in the last scene is getting nominated for the Nobel Prize, and even better, getting it on with Pam (well, just in our imaginations; that R rating is fiscal death).


My only request is that they let me write the screenplay. 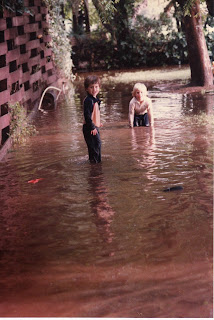