Two weeks before Christmas, my recently-retired engineer husband suffered an uncharacteristic attack of nostalgia and announced he was going to make his family’s holiday cookie recipes for the kids, his sibs and nieces, and even the neighbors.  I guess man cannot live by Erlangian Distributions alone.

Frankly, this put terror in my heart.  As my Thanksgiving column about my pie-making fiasco made clear, I am not a baker.  Cookies are a lot easier than pie crusts but if Olof, who has never baked anything ever, was counting on me for guidance, this could be a disaster.

Fortunately, or maybe unfortunately, Olof was able to get his sisters to dig through their old files and find the original recipes for the five types of cookies. What the recipes didn’t say, however, was how many cookies each recipe made.  Not a problem, said Olof, who insisted it required a simple application of undergraduate quantitative analysis.

Some hours later, Olof appeared with FIVE PAGES of spreadsheets, titled “2013 Christmas Cookie Plan” including projected output per recipe, number of cookies of each of the five recipes per recipient, ingredients by recipe, and a fourth one understood only by Olof.  The final spreadsheet tallied up the sum total of ingredients for all five recipes which generated a master shopping list. When I saw that we needed 17.5 cups of flour and 13 sticks of butter, I knew this wasn’t going to be a morning’s work.

Olof looked genuinely puzzled.  “How else do people make cookies?” he said.

With his engineer’s precision, he set out making the cookies a recipe at a time, including gingerbread men.  I was frankly agog with how well those came out even if a certain number were double amputees.  Originally, he’d thought it would be fun to make one batch of anatomically-correct ginger persons just to punk his sisters but I pointed out that shipping was going to challenging enough without specialty appendage packaging.

What really dazzled me, however, was that he decorating every one of the 70 ginger persons himself with homemade red, green, and white icing.  That had always been his job as a child, he maintained.  It was sort of like riding a bicycle.  You never forget. Twelve hours later, when all the cookies were baked and decorated, he flopped down in his favorite chair and announced “Done!”

Done?  “Olof, my lilla lutfisk,” I said, “Do you plan to beam these around the country?” A frown creased his brow. Logistics Distribution Planning hadn’t really been addressed in the spreadsheets.  He then recalled that getting cookies from grandma in college usually meant a shirt box full of really delicious crumbs, which he would eat with a spoon.

It went without saying that every last decorative cookie tin had been scoured from the store shelves long since.  After I amassed about $100 worth of packing materials, I divided up the cookies according to the spreadsheet whose projected output had been astoundingly accurate.  Who knew a degree in nuclear physics could have actual practical applications?


We set up an assembly line where I packaged the cookies individually (no crumbs for us!), padded them in large Tupperware containers ($62), then handed them off with a shipping label to Olof who cocooned them in a landfill’s worth of bubble wrap in boxes. Eco-friendly this wasn’t.

I’d also had him write up a description of the cookies for the recipients as not everyone was familiar with them.  Olof may have missed his calling.  The cherry-topped cookies, for example, were described as “sweet, flaky, and surprisingly suggestive.”

The day we were finally ready to mail was December 16, the busiest shipping day of the year.  The line at the Pacific Beach post office was out the door.  Waaayy out the door.  “Mental health move, Olof,” I said.  “We’re shipping from a private mailing place.”  It was well worth the $75.

In the end, we could probably have ordered more cheaply from the Lamborghini of bakeries, had the cookies gift-wrapped in gold leaf and hand-delivered in refrigerated sleighs by costumed Santas singing Jingle Bells in two-part harmony with Rudolph.

But it was fun.  (Mostly.)  It allowed Olof to re-live a favorite part of his youth and hopefully pass the tradition to another generation.  In fact, our niece in Florida reported that her son promptly ate the heads off all the gingerbread men, which made his younger sister cry.  She added, “I’m guessing this scene was probably reminiscent of Uncle Olof and Mom.”  Maybe that wasn’t the tradition he was hoping to pass on.  On second thought, maybe it was.

But note for next year:  make extra heads.

Flushed with success, Olof has decided to add making a pie to his bucket list.  Have at it, bucko.  I’m not getting anywhere near that one. 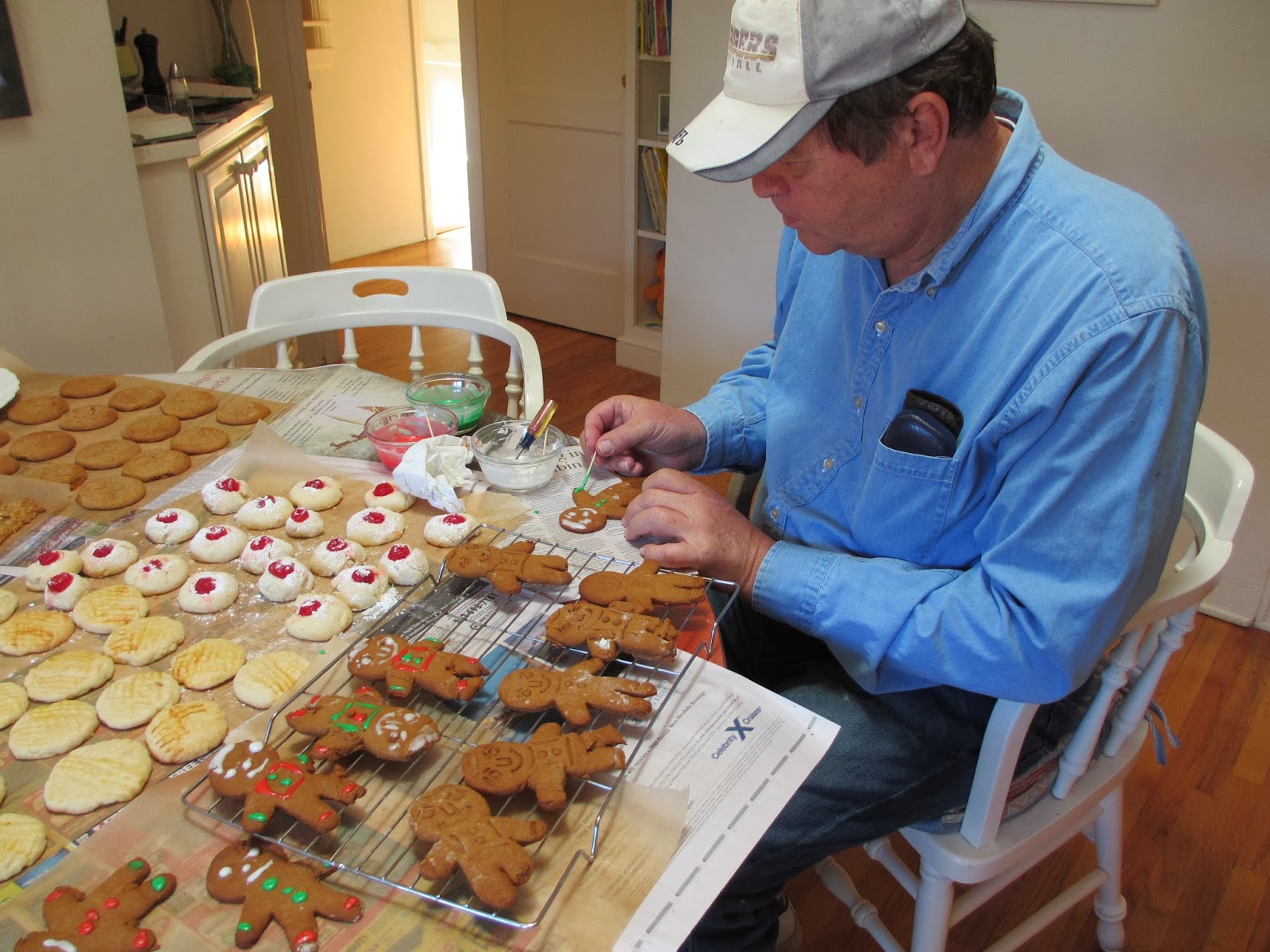