Amazon CEO Jeff Bezos recently announced that within four to five years, Amazon packages weighing five pounds or less and being delivered less than ten miles from a distribution center could be delivered aerially by drones, all within 30 minutes of ordering.  Even Bezos conceded that there were definitely kinks to work out with the new vehicles, like making sure they didn’t land on someone’s head.


I was intrigued by the demonstration video, and given that the US Postal Service hasn’t been able to find my house even after 66 years, enthusiastic.  But I also think La Jolla would have some unique difficulties with this technology.
First, our community consists of a four mile strip of land running along the coast where there is already some pretty crowded low-flying air traffic in the form of INS, police, and local military base helicopters, not to mention the occasional golf tournament blimp.


But the real competition for delivery drone air space would, of course, be sea birds.  Hundreds of pelicans endlessly cruise the coastal air currents over our homes, never mind the ever-present sea gulls who are always on the lookout for picnic leftovers.  How happy would they be with a perceived competitor for pizza crusts?  And who would prevail in a gull-drone encounter of the worst kind? Would the drone (with assorted gull parts) come crashing through someone’s roof?  Would the affected homeowner at least get to keep the Amazon item?  These are details Amazon may not have thought through.   But unlike the birds, at least the drone wouldn’t poop on people’s patios.
Another issue that Amazon may encounter in La Jolla is that the locals are very big on security.  Think of all the La Jolla bastions with gated entrances which require delivery people to be buzzed in.  How do you buzz in a drone?   It had better not even THINK of landing its four little legs inside the gate unannounced.

Even in less fortress-y homes, La Jollans are nothing if not picky about delivery instructions.  Amazon would be well advised to seek guidance from the long-suffering newspaper delivery folks or risk the wrath of messages like this:  “Your drone dropped my package in the driveway where my wife ran over it with the Lexus.  Please re-send asap and this time leave it on the second step of the front porch AWAY from the sprinklers and NOT on the driveway or in the azaleas!  I think we made this VERY clear!”

Will the drone be trained to avoid the ubiquitous swimming pools of La Jolla homes?  Having to fish your Amazon delivery out of the eight-foot end would be annoying indeed no matter how waterproof those boxes might be.

Then there’s the issue of dogs.  I think the first time, Winston would run terrified from it. The second time, recognizing a postal carrier in disguise, he’d be trying to tear its little droney legs off.  That drop-off time needs to be two nano-seconds or better.

But I see a far worse threat to delivery drones than birds and dogs:  Kids.  There’s even a historical local precedent for it.  From 1942-45, the U.S. Navy trained some 300,000 gunners at the Anti-Aircraft Gunnery School on the cliffs of Bird Rock.  Among the four types of targets used in training were radio-controlled drone planes made of wood and fabric which, if not shot down, would be brought down by parachute, hopefully landing inside the base. But they often didn’t, and the local kids, standing by with bikes, were on them in a flash, usually stripping the chute, engine, radio gear and even the wings before the Navy guys could show up to retrieve its now-skeletal remains.  It was part sport, part education (some of the kids were trying to acquire enough parts to build their own), and part status, as a shirt made of silk parachute material had a definite cachet at La Jolla High School in 1943.

It may be 70 years later but teenage boys haven’t changed.  I can already see an eBay market in Amazon drone peripherals.  Competitive teams in Amazon delivery drone captures.  Whole websites devoted to co-opted Amazon drone components.  Best of all, it would be a sport you could do in the privacy of your own home, er, yard, even while grounded for previous drone part  purloinings.  Whatever Mr. Bezos sees as the chief threat to delivery drones, think again.  He’s thirteen years old, and his Mom just ordered from Amazon.

Of course, none of this will matter on Christmas Eve, ironically the busiest night of the year for last minute shoppers, when Amazon will be compelled to ground its entire aerial fleet rather than risk a collision with the ultimate low flier, Santa.  There’d be no recovering from the PR disaster when millions of kids around the globe didn’t get their toys because an Amazon drone took out Rudolph. 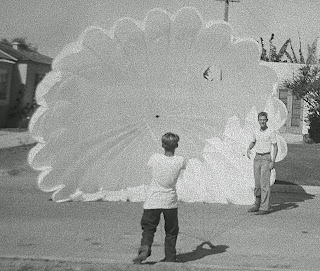