**For Better Or Worse But Not For Lunch

After three straight years of 7-day 80-hour weeks punctuated by frequent international travel to the U.K. and the Middle East, my husband, Olof, decided to retire. In the last four blissful weeks, it feels like I’ve reconnected with someone who’s been brought back from the dead, or at least United.

Surprisingly, most of my friends greeted the news of his retirement with genuine condolences, confiding that their ultimate nightmare was a husband not only under foot but requiring entertainment.  For better or worse, they said, but not for lunch.

Everyone who knows Olof was shocked to the core at his decision to retire as his well-known four word retirement plan has always been “Die at my desk.”  Speaking of that desk, it has always puzzled me that Olof’s work desk looked like a Staples office furniture ad but his home office resembled a paper recycling plant that had suffered a power outage. So I was delighted when one of his first retirement projects was to consolidate the work and home offices into a model of efficiency.  “It turns out that you CAN reduce entropy,” Mr. Engineer observed at my gratitude for this.  “But you have to apply energy.”

It is, of course, important to have plans for retirement.  (A recently-retired social worker friend maintains her goal is to “never help anyone again.”)  High on Olof’s list is his version of pleasure reading, and faster than you can say “40 pound techno tome,” boxes arrived from Amazon with snorer (well, to me) titles like “Introduction to Queueing Theory” and “Professional ASP.Net.”  After breakfast, he parks himself out on the patio, metal clipboard and mechanical pencil in hand suitable for diagramming and note taking, and happily wallows in technology.  You can take the guy out of the office, but you can’t take the office out of the guy.

I swear I didn’t ask, but he has taken on some of the household chores he used to do, like the dishes.  It’s reminds me of when my younger son first got his driver’s license and we heard the sound of the car backing out of the driveway for pre-dawn Saturday crew practice and we weren’t in it.  It was heaven.  I have the same feeling about hearing dishes going into a dishwasher that I’m not loading.

Olof picked after-dinner clean-up, he said, partly because he read that, in recorded history, no man has ever been shot by his wife while doing the dishes.  But though he’s too nice to say so out loud, I’ve sensed he’s never been all that happy with the job I do on the stove and counters and sink which the dishwasher, maliciously, refuses to clean.  (We can put people on the moon but someone can’t invent this?)  I am not the worst housekeeper in the world.  But I AM a contender.

Olof, on the other hand, spends at least a half hour doing the dishes just for the two of us.  He would never have made it as a single mother, let me tell you.  The stove top is spotless, the granite counter tops positively sparkle, you could be blinded by the shine in our stainless steel sink.  The cleaning lady showed up the first week after Olof retired, took one look at the kitchen and stopped dead in her tracks with a barely disguised “WTF?” look.  Olof is her new best friend.

Like military wives who find it hard to let returning husbands do things their own way, I have definitely had to get in touch with my inner control freak since Olof retired.  In my defense, much has changed in Dishwasher Land since Olof deployed to the office three years ago.

As I wrote in a previous column, we inherited a set of sterling silver flatware from one of his relatives.  It has Rules, including not putting the sterling next to the stainless in the silverware bins.  Even I ignore the caveat about hand washing the knives, having concluded that the glue attaching the handles to the blades has a longer life expectancy that I do.  But the first night, I saw Olof mixing the sterling and the stainless.

I didn’t say anything.  Husband doing dishes is not an event to be messed with.  But then I noticed he ran the dishwasher half full.  Now, to be fair, I think the Bosch people would probably consider it correctly loaded.  But seriously, I could have crammed three more days’ dishes in there, easy.

“Inga,” I said to myself.  “Step AWAY from the dishwasher!  The man is DOING THE DISHES.  If he wants to run it with two friggin’ forks, let him!”  But it’s been hard. Very hard.

So despite a couple little adjustments, so far so good.  Just love having the big guy around.  But my friends are already placing bets for December. 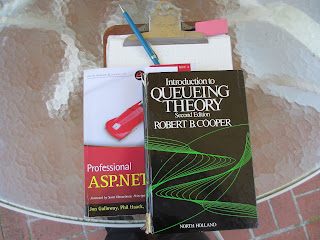