Could We Just Get Over It?


Actually, to be accurate, the French contingent were more yearning to breathe rich.  Already a well-regarded textile expert in France, my great-grandfather was recruited to come to the U.S. Northeast in 1901 to manage a woolen mill which he ultimately ended up owning; numerous expansions later, the mill became the largest tax payer in the state. Great-gramps was also an avid photographer, not exactly a common or easy hobby in an era when Photomats were in short supply.  It was strictly a do-it-yourself operation.   Unlike the firing-squad poses popular in the day, his photos are particularly delightful candids of the family (and dogs) in their daily activities – romping around the lawn, digging out of the Snowstorm of Aught One, celebrating birthdays, and proudly posing with their new Chalmers Motor Car. You really get a sense from these pictures that you know these people – a wonderful gift for their descendants.
Besides his wife and young son, great-gramps had also brought over his much younger (and frankly better looking) brother, Eugène, who up until 1906 had been in a preponderance of the photos but mysteriously disappears that year never to be seen again.  My father never knew why, only that there had been a huge falling out between the two brothers, so much so that the descendants of great-gramps and Eugène never interacted again.  In fact, a half century later, Dad happened to find himself at a Philadelphia hotel with a fellow business traveler who had the family’s highly unusual name.  Knocking on this man’s door, he was met with a face eerily similar to his own – and a huge deep freeze.


Eugène, I noted in the photos, obviously enjoyed a congenial relationship with great-grandma; the two are usually laughing, even touching. Photos of great-grandpa and great-grandma not so much.  Studying the pictures more closely a few years ago, I had a eureka moment, sure I had solved this 100-year-old family feud:  Eugène was getting it on with great-grandma, and great-grandpa found out.  (I should have been a romance writer.)
Fortuitously, in 2009, I came into ownership of dozens more of my great-grandfather’s photos which had languished in an elderly relative’s basement for more than half a century.  While a few were of the long-ago family, most were stunning photos great-gramps had taken documenting the mill and the mill workers themselves.  I thought I had died and gone to heaven.  Deciding that these truly historical pictures deserved a wider audience, I was able to find an appropriate historical web site which was thrilled to post them, and even contacted the local paper in the town where the mill had been located to see if current residents there might still be able to identify anyone – managers or mill workers – in the photos more than 100 years later. The paper wrote a story, posted sample photos and a link to the website, and included my email address.


I ended up hearing from plenty of people, none of whom, alas, could identify any ancestors in the photos, but chief among my new correspondents were descendants of the long-vanished Eugène.  And oui, they knew about the long-ago feud, and just to be clear, they hadn’t forgotten.
Oy.


Several sources informed me that in that era, the mill owners and managers were all French but all (and I mean all) the mill workers were French Canadians.  And the two classes absolutely never mixed, socially or by marriage.   But Eugène, following his heart, scandalized everyone by marrying a French Canadian mill worker, prompting great-gramps to permanently disown him.  It would have been, as one correspondent presciently pointed out in 2009 (pre-Downton Abbey) “like having your daughter marry the chauffeur – completely unacceptable.” When Eugène’s wife died of childbirth complications after their second child, he allegedly asked great-gramps for “help” (financial? babysitting? unclear) and got a resounding no.  So to really stick it to his brother and local society, Eugène then married the dead wife’s sister (also a miller worker) and had three more children. It did not improve relations.
So I think the mystery is solved, at long last, at least from our end.  (Sounds like other side never thought it was a mystery at all.)  My romantic’s heart would prefer to be associated with Eugène’s saga instead of great-grandpa’s but things were what they were in the early 1900’s.


But could we, like, get over it?
(For the record, I’m STILL suspicious about Eugène and great-gram.) 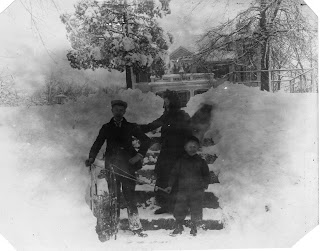 Eugène and great-grandma (smiling, hard to see in this size photo), in front
of the house after the Big Storm of 1901 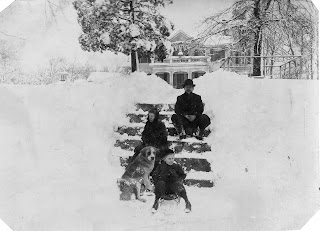 Great-grandma and great-grandpa, same storm
﻿
Posted by Inga at 10:09 AM