It is hard to believe that it is time for our annual holiday letter again.  As I sit here at my computer on this chill night snuggled in my warmest beach hoodie and sipping a hot mulled pina colada, I’d like to assure you that all those rumors about San Diego’s terrific climate are totally unfounded.  Indeed, if I had to sum up the year 2011, I would say that it has been one of terrible extremes of weather.

Already winter has struck here with savage force.  Several weeks ago, the temperature plummeted to a news-making 58 degrees, necessitating us to figure out how to turn on the pilot light on our heating unit for the first time.  Failing at that (just couldn’t figure out how to get our barbecue lighter wand in that itty bitty space), we simply ended up wrapping ourselves in our cabana cover. Looking out the windows in the mornings, one could see the joggers fairly shivering in their thin cotton T-shirts, and of course, all the open air restaurants were in an absolute dither.  (They didn’t know how to turn on their heaters either.)  Though it has warmed up since then, Sundays at the beach have simply had to be abandoned, and even poolside sunbathing is possible only a few hours a day.  The ocean, of course, is much too cold to swim in now (but then, many of us think the Pacific is too cold in the summer too).  We’ve simply resigned ourselves to the Jacuzzi till spring.  Rather than fight it, we have just decided to accept that winter is here and prepare for it.  So last weekend, with heavy hearts, we went around closing the windows.

Of course, this winter can only be better than last.  Many of you probably read in the papers earlier this year about the absolutely torrential rains San Diego suffered - eight record-breaking inches for the year, a staggering three-quarters of an inch above normal.  Bike paths were muddied, tennis courts rendered unusable with puddles, and lemons torn from their branches by winds gusting to twelve miles per hour. Residents raced to get their patio umbrellas cranked down in time.   The worst of it, however, was that all the rain made the bougainvillea and night-blooming jasmine grow so fast that we were out there every spare minute trying to whack them back – in February yet!   Then, barely six months of perfect beach weather later and bam! – it was winter again.

In between the recent unseasonably cold temperatures, the Santa Anas blew in  – clear and beautiful days with spectacular sunsets to be sure, but totally hot and dry.  We were forced to eat Thanksgiving dinner outside on our patio, barefoot no less!

So friends, wherever you are – Chicago or Boston, Stockholm or Goteborg – take heart.  Life here in San Diego is not always what it’s cracked up to be.  Meanwhile, Happy New Year and Gott Nytt År from your friends in La Jolla, 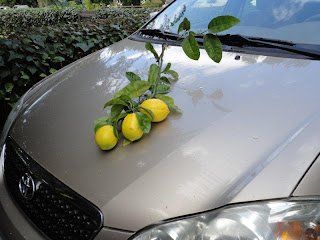