I can say with some authority after twelve years of having been a single mother that there is no lower form of life that ever crawled from the primordial ooze. Well, maybe one:  single mom’s Seedy Boyfriend.  Fungi have better press.


Mom’s Boyfriend is without saying a child molester.  That Mom has a boyfriend instead of a husband implies that she had three kids out of wedlock with three different fathers.  She has little education, no job, and low self esteem.  She most likely collects welfare which the boyfriend, the miserable sponge, spends on booze and dope.  He probably beats her.  She probably likes it.

During the eight years that Olof commuted down from the Bay area to La Jolla before he was able to relocate here and we married, he quickly discovered that being Mom’s Boyfriend was not exactly a high class gig.  A friend since high school, Olof is a former Air Force pilot, a Cal Tech-educated engineer, and at the time, a corporate vice president.  He loved going to my seven-year-old son Henri’s games.    So being accosted at the baseball fields and having his presence questioned by an overzealous mom hell bent on protecting the bleachers from T-ball player-stalking pedophiles kind of hurt his feelings.

Ironically, if there were an Olympic medal for number of sporting events watched of a child to whom one is not biologically related, Olof would have the gold. Conservatively, he cheered Henri through some 800 baseball, soccer, and basketball games, and arose at 3 a.m. on untold occasions to transport a carload of the collectively comatose to out-of-town crew races.  Pressed for his relationship to us, he often introduced himself, quite justifiably, as Henri’s driver.

For my side, it was never more clear to me that any residual status I had from fourteen years as a doctor’s wife was DOA when the mother of a friend of Henri’s said she wasn’t comfortable having her son sleep over at our house due to my new “circumstances” (presumably un-wed weekend cohabitation and by association, acts of wanton depravity).

I was seriously tempted to reply, “In retrospect, having the Cub Scout den satisfy their science badge in our meth lab was probably a mistake.  But that stuff isn’t as easy to make as you think.”

Henri, who had frequently played at this child’s tightly-run home, observed at the time, “I think they have dead people under their house.”   The overnight embargo officially marked the beginning of Olof’s and my eight year career as Seedy Boyfriend and Low-life Slut, as we affectionately dubbed each other in honor of the occasion.

The kids, I have to say, did nothing to improve my press.  When Henri was in kindergarten, he had been playing on the floor with a guy I briefly dated before Olof when his hair got caught in the guy’s metal flex watch band.  Much wailing ensued until he was extricated.  But imagine my dismay to go to kindergarten parents’ night some months later where the kids’ Feelings Books were displayed only to see Henri’s “I feel angry…” page, unfortuitously filled out the day after the incident, completed with  “when my Mom’s boyfriend pulls my hair.”

Rory didn’t exactly help me out either when his 5th grade classroom did “Aunt Amelias” – alliterative phrases which they then illustrated and which were posted in the main office.  His contribution?  “Paco the Pimp Pestered the Pregnant Prostitutes.”  The art work we won’t go into.

After eight long years in the sewer of social strata, I was overjoyed to finally make an honest man out of Olof at our wedding. We almost didn’t know what to do with our newfound status as people who were no longer a threat to the moral integrity of local youth.  Step-father, despite some negative connotations, was a huge promotion over Bottom-Dwelling Boyfriend, Wife a profound upgrade from Sordid Single Mom.  But to this day, Henri still feels those people have bodies under their house. 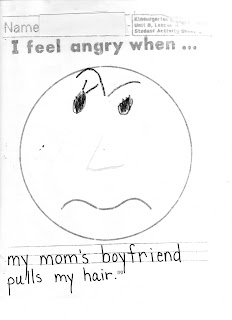